In September 2nd, Caixin China's Manufacturing Purchasing Managers Index (PMI), which was released in August, recorded 50.4, an increase of 0.5 percentage points over July, and a return to the upper and lower boundary of the industry, the highest since April, indicating a slight improvement in the manufacturing industry. 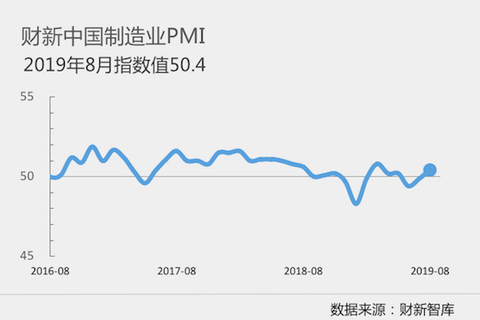 The improvement of PMI in Caixin China's manufacturing industry in August was mainly due to the rise in output. In August, the output index rose to an expansion range and recorded a five month high, driving the finished goods inventory index for the first time this year. Manufacturers generally say that the increase is due to signs of stronger demand.

The new export orders index contracted for three consecutive months, the lowest in 8 since December 2018, but the new order index dropped slightly, indicating that domestic demand improvement played a certain role in hedging the export decline.

The employment index in August was only slightly below the dividing line of prosperity and drought, indicating that the employment situation in manufacturing industry has improved.

The manufacturer reflected that the average input cost dropped again in August, which was affected by the decline in raw material prices. Although the decline was moderate, manufacturers cut down their factory prices to the highest level since 2016, in order to stimulate customer demand.

In August, the industry's optimism for the next 12 months was down in July. Manufacturers expect market conditions to improve and new products have come out, but they are worried about the Sino US trade frictions and the slowdown in the global economy.

Zhong Zhengsheng, chairman and chief economist of the new financial think-tank, said that China's economic boom has been restored. However, demand has not improved and external demand has declined. Although China's economy is showing signs of short-term warming, downward pressure has a long-term nature. Under the unstable relationship between China and the United States, counter cyclical policies need to continue to be overweight.

During The Season Of Textile Peak Season, The Boss Is A Little Annoyed.

Is The Peak Season Really Coming? Look At These Figures And You Will Know...

When Kim Gu Is Coming To The Pressure, When Is The Textile Market Turning Now?

Analysis Of China's Textile And Clothing Exports In July