Look! Who Is The Top Ten Plate Maker In Liaoning's Garment Industry This Year?

The spirit of craftsmen in the garment plate making division lies in its own unique understanding and aura. It lies in the dedication and persistence of the essence of clothing. It lies in the carving and ingenuity of exquisite skills. It focuses on the pursuit and innovation of excellence.

The clothing industry in Liaoning attaches great importance to the training and selection of the plate making masters. It is the first province to take part in the competition of the plate making masters in China. The competition has been held for ten consecutive sessions, and has selected a number of excellent plate making talents for the Liaoning apparel industry. It has made a due contribution to the talent reserve and the high quality development of Liaoning's garment industry. This year's "top ten" plate making competition of the garment industry in Liaoning Province, in the province's clothing enterprises, clothing institutions, plate making agencies recommended, 42 athletes entered the semi-finals, in July 6 to 7 days after 15 hours of fierce competition, and ultimately through the basic knowledge, clothing plate making, sample production, three-dimensional cutting four content assessment, 10 excellent plate makers were finalists. The 10 players independently finished the plate making and garment making according to the effect map provided by the organizing committee, and competed for the final rankings in the dynamic display section.

In order to stimulate the enthusiasm of workers in textile and garment industry to learn technology and knowledge, speed up the training of highly skilled talents and promote the upgrading and development of industries, there are very rich awards in this contest.

For the units that made outstanding contributions in the course of the competition, the Liaoning textile and Garment Association awarded the "2019 special skills Award for Chinese professional skills competition", "Wei Ya Ji" cup, Liaoning Province garment plate making division.

The list of the first to tenth winners of the competition is announced as follows: 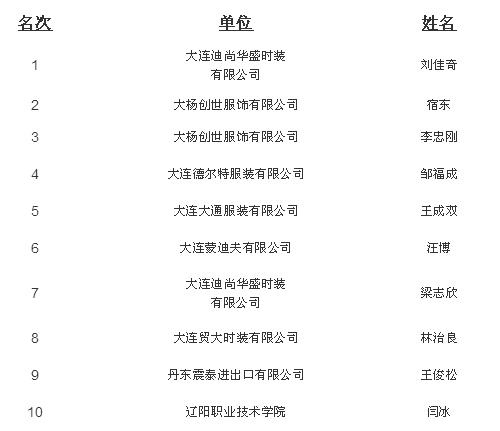 The United States Will Withdraw From The Universal Postal Union A Month Later. What Is The Impact Of Textile And Clothing Trade?

With The Advent Of The Winter Of Clothing Industry, HONGPU Pu Sweater Industry Cluster Is In The Initial Recession.

The Market Is "Thundering" And The Price Of Oil Is Wild. Polyester Market To "Big Market"

The National Garment Export Market Shows A Drop In Volume And Price, While The Central Provinces Are In An Inverse Trend.

In early September, there were two good news for the textile market: 1. China and the United States will hold consultations in mid September, and the thirteenth round of Sino US economic and trade consultations will intensify.