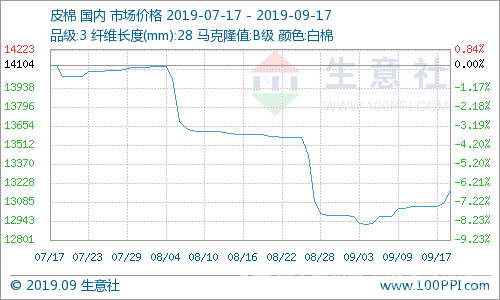 According to the price monitoring of the business community, the average price of lint 3128B lint in the domestic spot market was 13169 yuan / ton as of September 17, 2019, up 0.73% yuan or 95 yuan compared with the previous day. In September, the selling price of reserve cotton increased and the degree of concern was increased. On the 17 day, the turnover rate of reserve cotton was 100%, and the average price was 12144 yuan / ton.

It is expected that the market will seize market psychology, release good news, short-term price or small increase, and the average transaction price of the two days from national cotton store has declined, and spot gains may not be large.

Tight Supply Of Acrylonitrile And Wait For The National Day Holiday

At present, Hai Lan's home is a big drag, and stripping is a better choice for listed companies.