In the early September, there were two good news for the textile market: 1. China and the United States will hold consultations in mid September, and the thirteenth round of Sino US economic and trade consultations will strive for substantial progress.

2. the central bank said that in order to support the development of the real economy and reduce the actual cost of social financing, the people's Bank of China decided to reduce the deposit reserve ratio of financial institutions by 0.5 percentage points in September 16, 2019. This time the release of long-term funds is about 900 billion yuan. 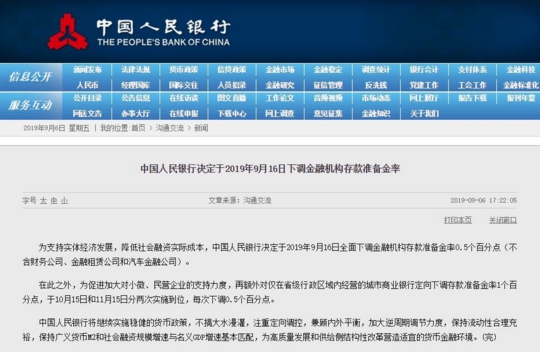 Generally speaking, the textile market will always respond to the release of good news. For this reason, the Chinese silk net collection and editing center team went deep into the textile market and visited some billet traders and traders in Wujiang area to hear what they think of it.

The impact is market confidence, and there is no substantial improvement in Sino US trade relations.

A trader in the Wujiang area said that Sino US trade is a combination of different factors that affect the rhythm of the market order. Now the so-called restart is not a good thing to do, but this year's devaluation is positive.

Most billet traders and traders believe that there is no substantial breakthrough in Sino US relations. This news can only boost market confidence. Sino US trade relations have been separated for a long time. They have some "immunity" to the news. They will not be overjoyed. For those companies that do not relate to the US dollar, the impact is not very large. For companies who make beauty lists, the impact is relatively large, which will affect the order rhythm of customers. At present, many American customers are shrinking their orders and orders, which is the biggest stumbling block in foreign trade this year.

The central bank will help stimulate the real economy and activate the market.

As is known to all, small and medium-sized textile enterprises have always faced difficulties in financing, and the purpose of this reduction is to stimulate the real economy. In the Shengze area, a boss of textile industry is looking forward to the expectation that the central bank will soon implement it. He told Xiaobian: "it is absolutely good news for us to drop again. Our company has relatively small factories and few machine factories. We have always wanted to continue to expand the scale of factories. But due to tight funds, financing is too difficult and has not yet been carried out. The release of this fund is mainly aimed at physical enterprises. The key is to solve the problems of financing and financing of enterprises like ours. I think it will be helpful for us to raise funds." Another trader also said that the drop is a timely rain for them, and the release of the 900 billion liquidity will be relieved by the "general reduction and quasi directional drop". Let us small and medium-sized enterprises have a chance to catch their breath. Of course, some enterprises say that the market is not good this year. They are not prepared to expand the scale of the plant, nor are they ready to finance. They only want to be able to stabilize the current dishes, so they have little impact on them. But for the whole market, it will surely be favorable. Lowering the reserve ratio will increase the market circulation of RMB, and the market will become more active if the currency in circulation becomes larger.

Although the release of these two good news has played a certain role in boosting the market, the textile market has not been substantially improved. Kim Gu has more than half. What is the performance of the textile market?

"Kim Gu" has arrived, regular product performance is not as good as expected, differentiation and niche sales are still acceptable.

Textile people have gone through a rather low season of "bad heart". They are looking forward to the arrival of the traditional peak season in September, which can slightly alleviate the "off-season", but the results do not seem satisfactory. The owner of a textile mill with more than 100 looms in Wujiang complained that the sale of polyester taffeta cloth was not ideal, and the pressure on inventory was high. The shade cloth is slightly movable, but the gap is still larger than the previous year. Conventional products had a bigger year-on-year impact. Another manufacturer of nylon yarn also had the same feeling. Xie's manager of the company said that the price competition of grey fabric on the market was fierce now. At the end of last year, the price of 380T's spinning was 4.5 yuan, and now it has dropped to 3.2 yuan, and the price of fabric has dropped synchronously.

In addition, a major manufacturer of imitation memory is not ideal. The grey fabric of conventional imitation memory products has been burst, but sales volume has been in the lead recently due to the development of memory T800. At present, T800, T400, functional fabrics and recycled fabrics are popular in the market. Now, the production of conventional products has been lingering at the edge of losing money. Only products with differentiated and niche products can kill a blood route.

The market can be seen from the Mid Autumn Festival National Day holiday.

Recently, textile people have just passed the Mid Autumn Festival, and in half a month, the National Day holiday will also come to an agreement. From the time of the textile people's vacation, it can be seen that the chief executive of a major household textile enterprise, Qian said: Recently, the list has been slightly better than before, and production and marketing can barely be done. This mid autumn festival will last 1 days and the national day will be about 3 days. There is also a holiday plan for manufacturers in Nantong, the company's Wu said: "although the recent Kim Gu, but the order is far less than the previous stage, and now two or three varieties barely maintain profits, so the Mid Autumn Festival will be put on the national day, about 1-2 days. Of course, there are also some manufacturers because of the recent single volume is still available, so there is no holiday plan, the Suzhou area of a functional fabric company manager to Xiaobian revealed: "recently, still can, orders can be done at the end of September, orders are now in succession, the Mid Autumn Festival national day must rush to ship, no holiday plan."

According to past years, it is the busiest time in nine and October. If the manufacturer has a list to make up, it will not take a vacation if it is ready for shipment. If it is too late, it will probably work overtime. This year, some factories have a holiday plan, which seems to give workers the benefits they deserve.

Kim Gu is lacking in color. What will happen next?

In September, more than half of them were considered to be the turning point of the market before and after the Mid Autumn Festival. At present, most manufacturers and traders still face the problem of lack of orders and high inventory. Most of the distribution boss is not optimistic about the market in the second half of this year. This year's market environment is not good, bad news is frequent. Sino US trade split and combination directly affect the next volume and order rhythm, the domestic market overcapacity, resulting in fierce competition at low prices. If the textile market can successfully remove inventory, the market may still improve.

The United States Will Withdraw From The Universal Postal Union A Month Later. What Is The Impact Of Textile And Clothing Trade?