Will Soon Usher In The "Double 12" Is Approaching The Printing And Dyeing Market Will Be Hot Again?

Recently, Wang Xiaobi complained to Xiaobian, "recently, fabrics are often dyed in cylinders at night and often work late." It can be seen that Xiao Wang's dyeing factory is alive and busy. So what is the recent market for printing and dyeing? Next, Xiaobian takes you to understand the real situation of the printing and dyeing Market.

But the recent printing and dyeing factory can be said to be relatively cold and cheerless. Like the scene of returning to May and June this year, the phenomenon of "not enough to eat" appeared. At present, the market order has basically come to an end. The volume of goods transported by the market led by T400 has dropped sharply. The main dyed fabrics in the dyeing and printing plant are mainly spring spun, peach skin, Thai, and four rounds. The starting rate of dye vat also dropped from 100% to 85%, and most dyeing factories appeared to do live jobs. In terms of delivery, it also accelerated from the original 7 days to 5 days.

In fact, most of this year's printing and dyeing factories are in a state of "staying alive and hungry." From the beginning of March and April to the beginning of the year, the traditional peak season brought about a wave of market, production was more crowded, and the delivery period lasted for more than 10 days. But after May, the market fell rapidly, and the market remained warm until the end of September. Even "Kim Gu" failed. In October, with the start of the market order, a wave of grey cloth flooded into the printing and dyeing market finally, and the phenomenon of "burst warehouse" appeared. But with the end of the market, the printing and dyeing Market once again returned to a state of calm and water. 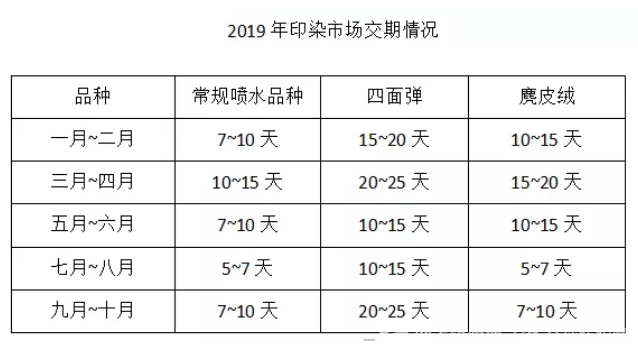 Back in December last year, the printing and dyeing market was also in general. In December, as the end of the year, there will always be a few rolls of winter clothes, but few of them are coming. The starting rate of dye vat is about 80%, which can maintain normal production, and is optimistic. The delivery time is about 10 days.

In 2019, will the printing and dyeing Market get rid of this year's fate?

Can the printing and dyeing Market rekindle its passion?

Looking back now, the "double eleven" has just passed and is about to usher in the "double two". Most of the situation will be like last year. In addition, the Spring Festival is earlier this year. According to the past production process, the order should be released earlier this year than before. Therefore, the possibility of placing orders in December is quite large.

Who will be the fate of the printing and dyeing market next year?

At present, most of the dyeing factories are mainly buying and selling orders next spring and summer, and the order and speed are relatively stable. It also means that the order will be orderly and have a good start next year. Then we may predict from that that the market for next year will not be too bad.

In other words, the current order is only a small part of the beginning of next year, and it can not decide the whole market. Therefore, we should not look too far at the problem. We should still prepare for the sluggish market. It is said that the textile market is "good for three years and bad for three years". According to this statement, this year is only the first year of recession. But this is just a common phenomenon summed up by experience, which can be used for reference only.

Does The US Group Comment Have No Rivals? Three Quarter Revenue Of 27 Billion 500 Million Yuan, Once Again Profit Competition To Business Information

In order to fully display the latest development of science and technology in China's apparel industry and accelerate the industrialization of innovation and technology, from November 21st to 23, "high quality" was introduced.