All Printing Enterprises In Puning Printing And Dyeing Park Have Been Put Into Operation, And Some Dyeing Factories Are Producing Normally.

Puning is "China's textile industry base city", and has a complete industrial chain such as spinning, weaving, printing and dyeing, and marketing. The textile and garment industry is one of the pillar industries in Puning. There are 2530 textile and garment enterprises in the city, about 150000 of the employees, and about 300000 of the employed population, with an annual output of 360 million meters and 1 billion 600 million garments. Textile printing and dyeing industry is not only an essential part of the whole industry chain, but also the main source of pollution before practicing the river basin.

In recent years, Puning has strengthened its industrial pollution source control and eliminated backward production capacity according to the target of training river water environment improvement. According to the principle of "industrial agglomeration, enterprise concentration, unified management and land intensive", Puning printing and dyeing center has been planned and constructed. 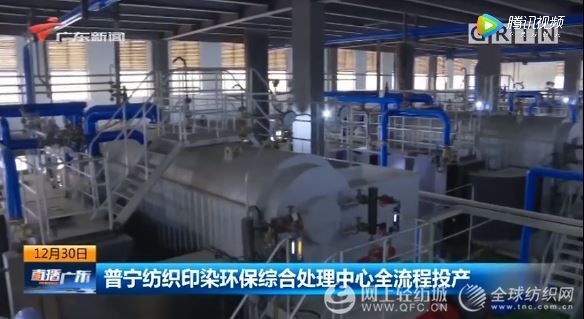 The workers skillfully operate advanced printing equipment, and the exquisite designs of cloth flow out of the production line like waterfalls, and enter the Puning textile dyeing and environmental protection integrated processing center. The factory building of the park is a bustling production scene. It is reported that the construction of printing and dyeing center has invested more than 2 billion 200 million yuan, and the 5 printing plants, heating and gas supply projects and the first phase of sewage treatment works completed by the government are basically completed to meet the production needs of the enterprises in the park.

He Jun Ming, head of the heating and gas supply project, said that the total investment of the printing and dyeing center energy station is about 750 million yuan, supporting the construction of liquefied natural gas storage tanks, vaporizer and gas boilers and other facilities. "The project has completed the installation of 5 LNG storage tanks, 14 vaporizer, 4 gas fired boiler and other equipment, and now has the capacity of supplying 80 tons of superheated steam per hour. After the completion of the project, 1 million 550 thousand tons of steam are supplied throughout the year. "
The sewage treatment plant of the printing and dyeing center was issued a sewage permit in December 26, 2019. The total investment of the plant is 394 million yuan, and the sewage classification and collection system of "one plant, one pipe, one monitoring" is adopted. The daily sewage treatment capacity is 60 thousand tons. At present, the equipment procurement and installation of 40 thousand tons of daily sewage treatment has basically been completed. The emission standard is COD or less than 40mg/L.
Through the comprehensive improvement of the stage, the water quality of Puning section of Lianjiang River has been improving continuously. The index of Qingyang mountain bridge section improved significantly in the 1-11 months of this year. The dissolved oxygen index increased by 128% compared with the same period. The concentrations of chemical oxygen demand, ammonia nitrogen and total phosphorus decreased by 51.7%, 31.1% and 44.2%, respectively. Chemical oxygen demand and dissolved oxygen all reached the V water quality requirements of surface water. The Puning section of Lianjiang River basically bid farewell to black and stink, and gradually restored its ecological function.

2019 The Long Hair International Fashion Year Will Be Successfully Concluded.

VISION STREET WEAR 2020, the new spring and summer series, is on sale.