The Demand Of International Market Is Insufficient, And The Price Of Textile And Clothing Foreign Trade Is Down. 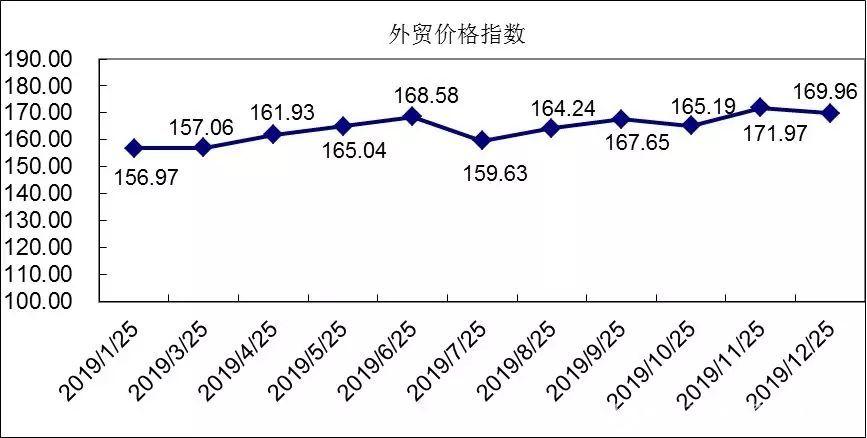 December, textile and clothing in Keqiao District, Shaoxing Exit Textile exports are showing a trend of decline in the ratio of volume to month. The export of textile and garment industry is blocked, and the trend is declining. Among them, yes. European Union The export of major markets such as ASEAN and ASEAN are not enough, and exports to the US market have declined. As is known to all, the textile industry is experiencing a recession period, and the degree of prosperity of foreign trade is much lower than that of domestic trade. Most textile enterprises still lack confidence in the whole trade situation. Among them, the factors such as poor terminal demand, overcapacity and increasing competition are all considered as the reasons for the improvement of the situation. The 20191225 phase of the foreign trade prosperity index fell, and the foreign trade price index fell.

First, the overseas market is down, and the foreign trade prosperity index is down.

1, export and export textile and garment enterprises have been affected.

The rapid growth brought about by demographic dividend and low cost is no longer effective. Build and build through its own brand Intellectualization Transformation, some scale export textile enterprises try to find new competitiveness. When we mentioned foreign trade orders before, we were all impressed by the large volume and the stable price. At present, foreign trade orders are not only in quantity but also in price. Textile and clothing as labor intensive The industry is mainly restricted by labor costs. With the upgrading of domestic production and operation costs, domestic enterprises have lost the advantage of being a machining center. At present, the global textile and garment manufacturing is accelerating from China to Southeast Asia and other places where labor costs are lower. Exchange rate fluctuations and trade risks also increase the concerns of enterprises.

2, the foreign trade situation is still showing signs of weakness.

At present, we are facing severe foreign trade situation and many restrictive factors. The first is the lack of international market demand. The global economic recovery is slow, the main export market demand recovery is low, weak situation in the short term is difficult to improve. Two, industry competition is more intense. ASEAN and Africa, Latin America and other low cost labor countries are entering and becoming the textile manufacturing base in the future. Industrial transfer And the shift of industry orders is a challenge to China's textile trade. Three, domestic costs continue to rise. China's textile raw materials and labor costs gradually increase, and labor costs are close to Eastern European countries. Four, there is no effective growth point. Five, China's textile enterprises, in addition to facing external competition, will also face more countries' trade protectionism.

The external situation faced by China's textile industry is more severe and export profit margins are falling. The main export markets, such as Europe, the United States and Japan, are all short of orders, and the pressure of industrial export is hard to alleviate. The pressure of rising domestic cost is difficult to mitigate. Cotton yarn There is still uncertainty in the raw material market. Some small and medium enterprises that have no product superiority will not hesitate to further compress profits when undertaking orders, or even "zero profits". In the short term, the structural contradiction between supply and demand of textiles in the domestic market is prominent, and the public products will maintain the situation of excess supply and negative demand growth.

2, the international market demand is insufficient, export prices are down.

Textile and garment industry is a traditional labor intensive export industry in China. It has always been a major proportion of China's export trade. However, due to the lack of international market demand and other factors, the popular type of export enterprises in the fierce competition, only by constantly reducing the price to win. In December, the export of textile and clothing was insufficient, and the export prices of mass products, which represented by textile and clothing, fell.

Textile has always been an important economic pillar in China, and has been warmly welcomed in the market at home and abroad. But ordinary production processes and products produced under low cost raw materials. quality Uneven and lack of function are also the main reasons for the decline in export prices. Limited by technology personnel Because of the lack of capital and the cost of production, most manufacturing enterprises can not keep up with the leading level at home and abroad when they produce their products. Most of the textiles produced have the problems of low technology content, few functions and low quality. They can only be targeted at the middle and low market, and are easily constrained by foreign economic conditions and standard clauses. At present, the downward pressure on Keqiao's foreign trade growth is still relatively large, and the foreign trade orders of the public products are insufficient, and the price is down.

Three, the next forecast of foreign trade index

For the export situation in January 2020, textile and garment exports are expected to show a downward trend. In January, due to the long holiday of Spring Festival, production enterprises stopped production and holidays, and the traditional market was completely closed. "China, Keqiao." Textile index It will stop for one issue. For the export situation in February 2020, the slowdown in scale growth and low demand growth will become the main keynote. Textile and clothing exports are expected to pick up in February. Textile enterprises in Keqiao, Shaoxing will build a platform for "Internet + foreign trade" to build a foreign trade ecosystem. Textile trade will also usher in new opportunities for development.

Lining Will Jointly Launch The Capsule Series At The Age Of 30.

Recently, a member of the Chinese Writers Association, the twenty-third high school student of Lu Xun College of Arts, signed by Zhu Jianping, a signing writer of the national public security federation, was arrested in 2017.