The Productivity Of N95 Masks Has Reached 128%, And More Than 20 Thousand Of The Country'S Medical Staff Have Reinforced Hubei.

"As of February 12th, domestic manufacturers have sent 726 thousand and 700 medical protective clothing to Hubei, 358 thousand and 400 medical isolation masks and isolation goggles, 156 negative pressure ambulances, 2286 ventilators, 6929 ECG monitors, and 761 automatic infrared thermometers. On February 13th, at the press conference of the joint defense and joint control mechanism of the State Council, Cao Xuejun, deputy director of the Department of consumer goods industry of the Ministry of industry and information technology, introduced the deployment of medical supplies to the affected areas.

According to the twenty-first Century economic report, as of now, 29 provinces, autonomous regions and municipalities and the Xinjiang production and Construction Corps have mobilized nearly more than 20 thousand medical staff to form more than 180 medical teams to support Hubei and Wuhan. At present, the 19 provinces have established supportive relations with the cities with counterpart support, clarified the key points of support, and improved the support schemes.

In February 13th, the latest epidemic situation released by Hubei Province: 14840 newly diagnosed cases in the province, including 13332 cases of clinical diagnosis. In response, Wang, a well-known epidemiologist, rushed to the twenty-first Century economic news reporter that the data was not "new / new discoveries", but because the large number of reinforcements and diagnostic reagents provided a great deal of confirmation for suspected cases, and the medical team and the medical aid were playing an important role in this war. 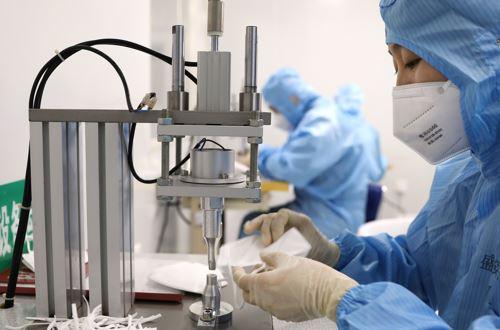 Cao Xuejun said that the main difficulty of current medical supplies protection is the demand entering the "wartime mode", which can be said to be a hundredfold increase compared with peacetime. Moreover, before the Spring Festival holidays, the emergency production of existing production enterprises is facing tremendous pressure in workers, raw materials and even industrial chain. In the early days, due to the difficulty of resuming labor during the Spring Festival, import protective clothing and stock protective clothing played an important role in supply protection, and the supply of subsequent protective clothing was mainly domestic production.

In twenty-first Century, economic news reporters also learned from the front line that some medical supplies were still in short supply. Gao Donghan, a nurse of No.3 Hospital of Beijing University's respiratory and critical care medicine department, started working in the ward in the early morning of February 10th. During the shift, he encountered the embarrassing situation of emergency equipment. The players could not enter the ward without protective equipment, and she took the initiative to fight for three hours.

For the public's close attention to the masks, Xia Nong, the first class inspector of the national development and Reform Commission's industry development department, said at the press conference that the company is now rapidly organizing the enterprises to resume production, and at the same time, it is also vigorously promoting the expansion and transformation of enterprises, and is actively ensuring the coordinated operation of the whole industrial chain.

Xia pointed out that the next step will continue to do a good job in the production and expansion of masks, and further strengthen production monitoring and scheduling, solve problems in the production of enterprises in a timely manner, and strive to achieve full production and overproduction on the premise of ensuring safety in production and product quality. In addition, according to the needs of epidemic prevention and control, we continue to carry out special work on mask expansion, and further expand medical care, especially medicine. The production of N95 masks should be strengthened. At the same time, the supply coordination of key equipment and raw and auxiliary materials should be further strengthened so as to ensure the implementation of project construction and smooth production.

"At the same time, for key provinces and industries, we will also effectively protect key demand through deployment and use." Xia Nong said he hoped that the masked enterprises without full load would release the production capacity urgently, and the enterprises with conditions could actively implement the technological transformation and production and expand production.

In addition to massive medical and material support, a number of health care teams are also actively involved in the prevention and control of the epidemic.

"The treatment of patients is the top priority in the current epidemic prevention and control work, especially in Hubei and Wuhan. There are many patients and many severe cases, and the task of medical treatment is very heavy. We will continue to intensify our efforts and take the power of the whole country to concentrate the resources of treatment to the front-line of epidemic prevention, and strive to improve the rate of hospitalization and cure, reduce the infection rate and mortality. The national health and Health Committee, the inspector general of the medical and health authority, said Guo Yanhong.

According to Guo Yanhong, as of now, 29 provinces, autonomous regions and municipalities directly under the central government and the Xinjiang production and Construction Corps have mobilized nearly more than 20 thousand medical personnel to form more than 180 medical teams to support Hubei and Wuhan. In February 13th, the military system reinforces 2600 doctors and nurses to Wuhan for treatment.

"In view of the severe problems in Wuhan, Hubei, more than 7000 of the medical strength we have increased are more severe medical professionals. They are mainly to help Wuhan, including other cities outside Wuhan, to increase the intensity of severe treatment, which can effectively reduce the mortality rate and improve the cure rate." Guo Yanhong said.

In February 7th, at the press conference of the joint defense and joint control mechanism of the State Council, the national health and Health Commission proposed to support Hubei Province in strengthening the treatment of patients.

In this regard, Guo Yanhong said, at present, the 19 provinces and the cities with counterpart support have established supportive relations, clarified the key points of support, and also improved the support programs. Moreover, within two days, a total of 25 medical teams and more than 3500 medical personnel were sent to achieve full coverage and full satisfaction of 16 cities. "While the 19 provinces are sending out medical strength, they should also increase the strength of 50% as reserves in the light of the different needs of the city."

At present, tackling the difficulties of the epidemic is the focus of the national medical system. But at the same time, under the epidemic situation, how to develop normal medical services is also a new problem that needs to be faced.

Guo Yanhong pointed out that "according to the different epidemic situation faced by all parts of the country, classified management and precise implementation."

Guo Yanhong said that for areas with heavy epidemics, such as Hubei and Wuhan, the current focus of medical treatment is to do a good job in the treatment of new type of patients with coronary pneumonia. At the same time, we should co-ordinate the medical resources, properly arrange the health care for the critically ill patients such as cancer and uremia, and pay special attention to the key medical groups such as children, the elderly and women. In areas where the epidemic is relatively mild, the epidemic prevention and control work is always in a complete and smooth service system, and daily medical services should also be done to ensure the health care needs of the normal population.

In addition, Guo Yanhong also pointed out that Internet health care and internet medical advisory services can play a good role in this period. Through online guidance, patients can seek medical treatment at different intervals, minimizing the aggregation of patients in hospitals and reducing the risk of cross infection.

Li Yige Column To Inject Confidence Into The Property Market

Suspension Of Classes Without Controversy: Online Education Must Also Be "Enlightened" For Large-Scale Popularization.

Under The Price Of Less Than 10000 Yuan, Samsung'S New Generation Of Foldable Mobile Phone Play?

The Difference Between The Performance Of The 6 Nucleic Acid Reagents Is Calling For Priority Collection Of Lower Respiratory Tract Specimens.

There is still a difference in performance between the kit and the "gold standard". In the industry, the throat swab is often inaccurate and the transportation process is difficult to control.