The Latest Research Report Shows That The Textile Industry'S Overall Production Is Generally Stable, And The Foreign Trade Situation Is Becoming Grim.

In order to better understand the direct impact of the new coronavirus pneumonia on the production and operation of the textile industry, China Textile Federation launched a weekly survey on the resumption of textile production in March 3rd. As of March 25th 12, a total of 465 enterprises had feedback on the operation of the enterprises. The China Textile Federation (CSPC) carried out a summary analysis of the weekly information, and submitted the latest progress of the industry's resumption of work and recovery to the relevant departments of the national development and Reform Commission and the Ministry of industry and information, and feedback on the difficulties and policy demands faced by the enterprises, and put forward policy and measures suggestions. Presently will March 18th ~3 25 The report of textile enterprises' resumption of production and reproduction within one week is as follows:

The situation of resuming and resuming production of textile enterprises is generally stable, and the resumption of small and micro enterprises has improved further.

According to the results of the weekly redevelopment report, at 12 hours ~3, 25, 12, March 18th, a total of 245 enterprises submitted effective rework data through the online questionnaire. The proportion of the returned enterprises has reached 97.1%, a slight increase of 0.2 percentage points compared with the previous week's survey results, and the number of returning workers in 238 households has reached 301 thousand, accounting for 91.4% of the total number of employed workers under normal conditions, compared with the previous week's findings. Increase by 4.1 percentage points. Enterprises in Hubei, Xinjiang and other areas that had been delayed by the epidemic were resumed and resumed production. 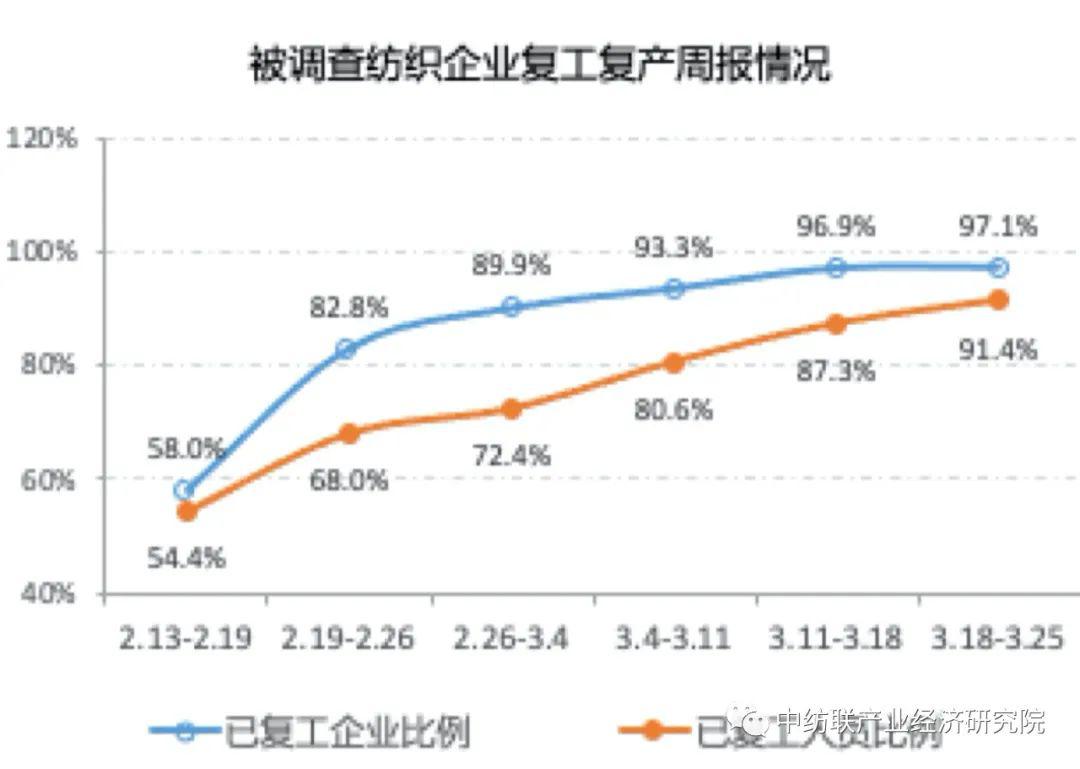 The central textile union group office and the park office carried out a survey of 28 key textile industrial clusters in 13 provinces of the country. Up to 15 March 19th, a total of 66 thousand textile enterprises in these clusters resumed production, accounting for 86.2% of the total number of cluster enterprises, which increased 11.2 percentage points from the survey data a week ago, and the number of workers returning to work reached 1 million 561 thousand, accounting for 71.5% of the normal employment numbers, compared with the survey data a week ago. Increase by 12.5 percentage points. Among them, 3942 of the above scale enterprises in the cluster, the proportion of the returned enterprises has reached 98.6%, and the proportion of the reemployment staff has reached 81.6%, which is 3.2 and 10 percentage points higher than that of last week's survey data respectively. 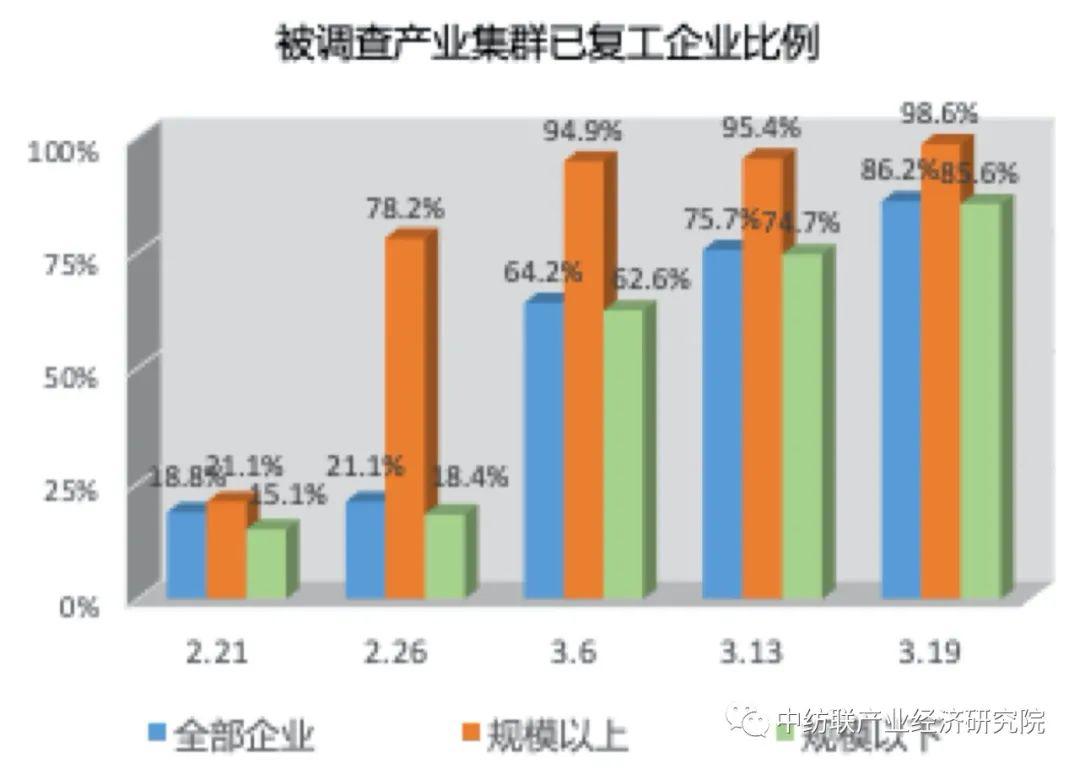 The synergy efficiency of the industrial chain has been steadily raised, and the start-up load of the enterprises has remained stable.

At this stage, the progress of resuming and resuming production in the upstream and downstream of the textile industry chain is basically synchronous, and the overall industrial chain coordination and operation efficiency is generally improving. According to weekly survey data, more than 95% of the cotton textile and chemical fiber industries in the upstream of the textile industry chain and the enterprises in the middle and lower reaches of the weaving, dyeing and knitting industry have returned to work, and the proportion of workers returning to posts has increased to more than 90%. According to the survey data from China Textile Federation on key industrial clusters, the proportion of the 10 enterprises with 40 thousand complete garment and home textile industrial clusters in Dongguan, Nantong, Changshu and Haining has reached 84.4%, which is 9.5 percentage points higher than that in the previous week. Among them, the proportion of Enterprises above designated size reached 98.8%.

Affected by the global spread of the epidemic, the level of enterprise orders has dropped, and export enterprises have been asked to postpone delivery or cancel orders.

Last week, textile industry orders showed signs of improvement, but this trend has changed this week. Affected by the global spread of the new crown pneumonia epidemic, business in developed countries such as the US and Europe has been shut down in large areas, and many export enterprises have encountered overseas customers' withdrawal and abandonment. The export situation of the textile industry is becoming more and more serious.

According to the survey of China Household Textile Industry Association, since March 18th, many export enterprises have received notice of delayed shipment from European and American customers, and some overseas customers have cancelled orders for nearly two months. The downstream export enterprises were largely taken off, causing the domestic suppliers of the upstream industry chain to also face the pressure of order reduction. According to the survey conducted by the China Cotton Textile Industry Association on March 16th ~20 for more than 120 key enterprises, 35% of the surveyed enterprises reflected insufficient orders, an increase of 12.1 percentage points compared to the survey a week ago. 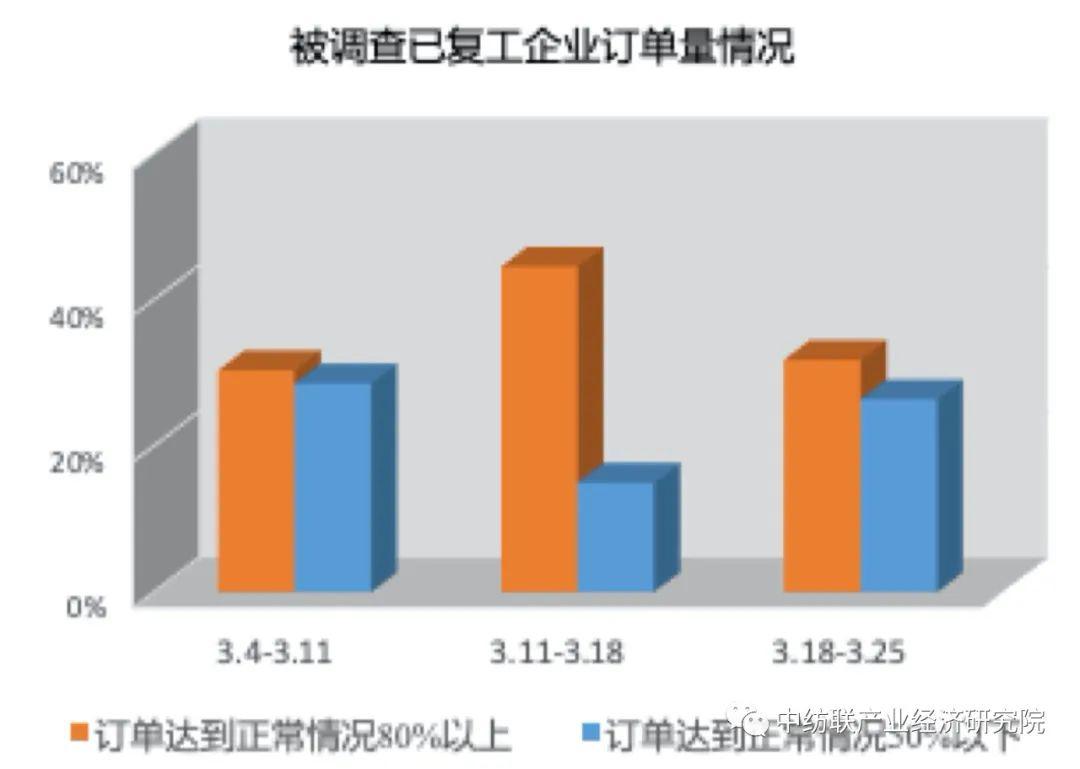 Insufficient orders and poor sales are the outstanding difficulties facing enterprises. Under the severe situation of global epidemic prevention and control, it is suggested that enterprises should carefully arrange production and actively prevent and control capital chain risks.

With the improvement of domestic epidemic prevention and control situation, the most prominent problem of workers returning to work and poor logistics in the early stage of reemployment has been greatly alleviated. The shortage of orders has become the primary difficulty in the production and operation of enterprises. According to the results of weekly redistribution and cluster survey, 57% of enterprises and 75.9% of industrial clusters have feedback problems. In addition, due to the fact that the epidemic has not yet ended, commercial entities have not yet been fully restored to normal business, and passenger traffic is also less serious than normal. In addition to the decline in orders, export enterprises have also seen the situation of goods being stranded overseas or rejected, and the cost burden has increased.

China Textile Federation has conscientiously sorted out the policy demands put forward by the enterprises, and put forward policies and measures for the relevant government departments to vigorously strengthen financial support, effectively lighten the burden on enterprises, start domestic consumption as soon as possible, and support export enterprises to tide over difficulties.

At present, although the domestic epidemic prevention and control situation is steadily improving, the global epidemic prevention and control situation is extremely grim. It is expected to last for a long time, and the international market is obviously declining, which has a high uncertainty on the domestic textile supply chain. Recently, due to the cancellation of orders, many textile enterprises have seen sharp increases in inventories and tight capital chains. It is suggested that enterprises should anticipate the overall market tension in the first half of the year, plan reasonable production and operation strategies, carefully arrange production load, raw materials inventory and investment projects, vigorously prevent and control capital chain risks, and strive to maintain stable operation at low speed.

Embracing The New Model And Seeking Business Opportunities In The Cloud, The First 2020 Global Textile Cloud Exhibition Was Successfully Held.

Focusing On High Quality, Well Read Two Industries, Working Hard To Build Up The Printing And Dyeing Industry And Enhance The Tough Battle.

Recently, an online live broadcast conference is being held in the exhibition hall of "Zhong Mao home textile" in Keqiao. This is also the first time for the global textile network and the online Textile City.