Lining believes that the increase in gross margin is mainly due to the improvement of brand recognition. The discount offered by the group to the franchisee has been improved. The sales discount of the old and new products has been improved, and the cost ratio of the tag has been further optimized.

Sales growth of group and various outlets in 2019 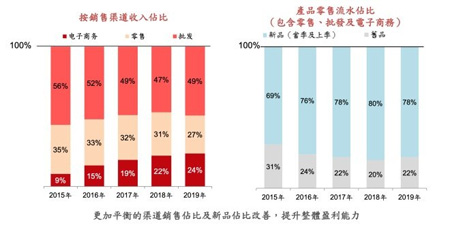 From 2015 to 2019, Lining accounted for the sales of various channels.

Sub channel, Lining revenue 98.1% from the Chinese market, overseas income accounted for 1.9% of the total.

Among them, the income from franchisees accounted for 49.5%, the direct business accounted for 26.1%, e-commerce channel revenue increased by about 40%, accounting for 22.5% of the total revenue.

By the end of 2019, the number of Lining sales outlets in China (excluding Lining YOUNG) totaled 6449, a net decrease of 115 from the end of last quarter.

With a net decrease of 214 retail business, wholesale business increased by 319, and 105 in early 2019. The number of children's clothing brand Lining YOUNG sales points totalling 1101, a net increase of 308.

Lining, executive chairman and co chief executive officer of Lining group, pointed out that in 2019, in the face of increasingly subdivision of sports consumption demand, we continued to focus on building and consolidating Lining experience value. Through diversification strategy, integrate the advantages of online and offline platform, and use digital marketing strategy to further connect the brand with different consumer groups, and enhance the brand image and value of Lining. During the year, the group's main operational indicators were further optimized, and the group's revenue grew steadily and profitability continued to improve.

Regarding the future, Lining said that he would take every step of the way and devote major resources to sports knowledge learning and technology research and development, and actively seek and explore more business development space. In the face of the impact of the new crown pneumonia epidemic on the whole industry, Lining analyzed that after the outbreak of the epidemic, people would pay more attention to physical training and physical fitness, and the potential of the industry remains to be released.

Is It A Result Of An Unprecedented Increase In Inventory Pressure?

Is The Epidemic Red Flu Disinfectant Changing The Future Or Repeating History?

In the past two months, the disinfectant industry has been somewhat magical. There were more than 2500 domestic disinfection products enterprises registered in February, and the shell manufacturers of skin care products manufacturers.