It Started With Several Manual Hosiery Machines. The Textile Giant Last Year Had A Revenue Of 80 Billion. 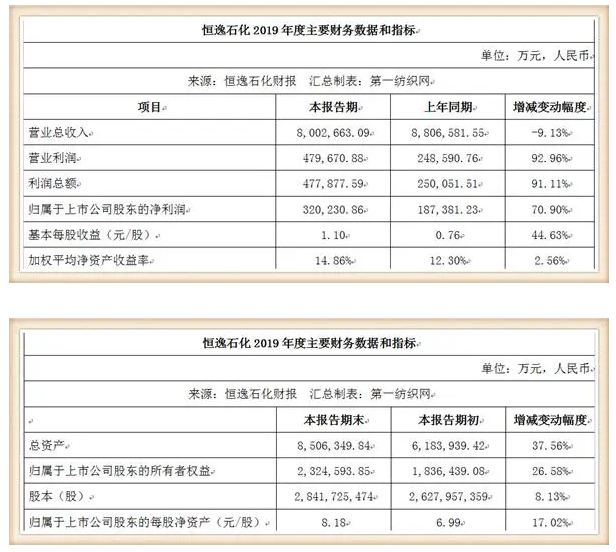 Heng Yi Petrochemical explained that the main reasons for the change in performance during the reporting period were:

1. During the reporting period, Brunei refinery project has been completed and put into operation. The business advantages, policy advantages and technological advantages have been brought into full play, and the operating efficiency has been highlighted, adding profits to the listed companies.

According to public information, Hengyi Petrochemical Company is a subsidiary of Zhejiang Hengyi Group Limited. In 1974, Hengyi group was founded in Xiaoshan County Yamen former commune knitting factory, with only a few manual hosiery machines. After twenty years of bold development, Hengyi group was formally established in 1994, forming a production and operation system of chemical fiber spinning, weaving, dyeing and finishing. From 2001 to 2010, Hengyi group stripped weaving and printing and dyeing business, and successfully expanded to the upstream of polyester and PTA industries, forming an industrial structure of PTA, polyester spinning and chemical fiber plus elastic yarn integration. In 2011, Heng Yi Petrochemical was successfully launched on the backdoor of the century. In 2012, the company announced that it was planning to invest in refinery projects in Brunei (PMB) to enter the upper reaches vertically, and to establish a joint venture with Sinopec for the production of caprolactam and the horizontal layout of the nylon industry.

With the capacity expansion of PTA, polyester and caprolactam in recent years, Hengyi Petrochemical has become the world's leading manufacturer of PTA and PET fibers. At the same time, with the PMB phase I project put into operation in 2019, Hengyi Petrochemical will soon enter into a new pattern of refining and chemical integration.

Liu Jun analysis, looking back on the development of nearly 10 years, clearly shows that the performance of Hengyi petrochemical company has improved significantly since 2016, including three logic:

First, the upgrading of the industry structure is the essence of the upgrading of the oil price and the improvement of the economy. The upgrading of the industry must be directly caused by the improvement of the supply and demand pattern of the industry. From the PTA industry, after the painful "going to capacity", the pattern of the industry has changed. There are, of course, two catalysts: first, the price of crude oil is the uptrend of the market, and the two is 2. In the past 017 years, the improvement of the global economy has been catalyzed. Polyester industry chain is one of the lower reaches of petrochemical industry, and its price is driven by the price of crude oil. Looking back at the trend of the polyester industry chain in the past two years, we can easily find that the bottom up of crude oil prices in the second half of 2016 will play a catalytic role in the recovery of the overall industrial chain, and the recovery of the global economy in 2017 has ensured the catalytic effect. It needs to be pointed out that the recovery of the global economy is related to the recovery of crude oil prices.

From the point of view of revenue structure or from the gross profit structure, Liu Jun believes that Hengyi petrochemical "PTA+ polyester" business is still the most important business segment affecting Hengyi Petrochemical's performance. Therefore, the prosperity of PTA and polyester links almost determines the performance of the past few years.

In addition, on 2019, 11, 3, Hengyi Petrochemical announced that the Brunei PMB petrochemical project was put into operation and became the second target of private production. Liu Jun believes that Brunei project profit is likely to exceed the market expectations, the next 2-3 years, the profit center in the 4 billion yuan or more, and a stable low tax environment, the company should enjoy a certain premium, the valuation level is expected to further enhance.

Shenda Shares (600626): Holding 70% Overseas Subsidiaries Auria Due To The Epidemic Is Expected To Suspend Production For Two To Four Weeks.

Foreign Trade Depends More Than 80% Of Keqiao, Shaoxing: Is The Order Okay?

What Can Millet Do In The Field Of Children'S Shoes?

What can millet do in the field of children's shoes? Every pair of shoes of millet step has been strictly selected by the supply chain before going out of storage, which can not shake the first throne of online children's shoes category.