The End Of High Leverage Of Real Estate Enterprises: From Housing Speculation To "Three Red Lines"

The era of rapid expansion of real estate enterprises with the help of high leverage is coming to an end.

In recent months, the supervision of the competent departments on the real estate financing link is rapidly upgrading. On June 24, the CBRC issued a document emphasizing "strict control of illegal funds flowing into the real estate market". On July 24, a forum on real estate work was held, and it was proposed for the first time that "a sound financial Prudential Management System for real estate" was put forward. On August 20, the central bank and the Ministry of housing and urban rural development held a forum on key real estate enterprises to study and implement prudent management of real estate finance.

Among them, the management of real estate financing is mainly based on the "three red lines", specifically as follows: after excluding advance collection, the asset liability ratio is greater than 70%; the net debt ratio is greater than 100%; the cash short debt ratio is less than 1 times. According to the real estate enterprise's "line" situation, it is divided into "red, orange, yellow, green" four grades, and then implement differentiated debt scale management.

As a capital intensive industry, real estate enterprises have been used to borrowing for a long time. In the "golden age" of the industry, there are always cases of high growth through periodic high debt. But at the same time, high debt has also brought down the capital chain of some real estate enterprises, and at the same time, it poses a threat to financial security.

In recent years, with the concept of housing not speculation deeply rooted in the hearts of the people, the real estate rapidly returns to the residential property, and the management of liabilities is also gradually tightened. Although real estate enterprises have consciously strengthened capital security, the tightening of policies has obviously exceeded expectations, and from all aspects, this is not a short-term behavior, but a normal means. 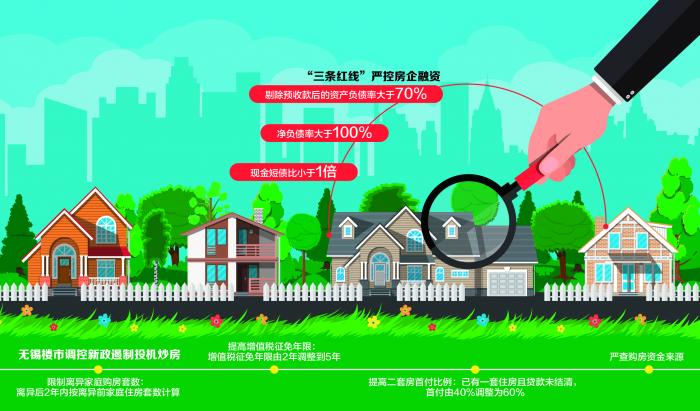 The tightening of real estate financing policy seems to be very sudden, but in fact, in recent years, the keynote of real estate market regulation has been "deleveraging".

The central economic work conference at the end of 2016 proposed for the first time that "the house is for living, not for speculation". Since then, regulatory authorities have issued a number of rounds of policies, and local governments have also issued documents to regulate. By 2019, the long-term mechanism of real estate will be gradually implemented, which means that this round of real estate market regulation has entered the stage of normalization.

During this period, the deleveraging policy on the demand side is the most noticeable. In addition to the previous restrictions on purchase and loan, the regulatory authorities at all levels also introduced the "sales restriction" measures for the first time. Through the provisions on the holding period of houses, the regulatory authorities at all levels have curbed the speculation of buying low and selling high in the short term.

In the second quarter of this year, some regional markets recovered rapidly from the epidemic, and all kinds of funds poured into the property market. In order to curb the overheating of the market, some cities began to crack down on "capital loans" and "housing mortgage loans", and many other cities issued documents to block the loopholes of "false divorce". These measures are also deleveraging on the demand side.

Evergrande Research Institute pointed out that in the first half of 2020, the proportion of new RMB loans from financial institutions accounted for 18.9%, which was 19.8% lower than that of 38.7% in 2016.

The reporter of the 21st century economic report has learned that before this, the regulatory authorities have conducted many rounds of investigation and consultation, and some real estate enterprises have also participated in it. Since last year, many enterprises that smell the policy direction have begun to adjust the debt structure and control the debt scale. In addition, prior to the good market sales and loose financing environment, the debt ratio of the whole industry is lower than that in previous years.

Guotai Junan Securities believes that mid-2019 has been the relative high point of interest bearing liabilities of real estate enterprises. "Since the second half of 2019, real estate enterprises have begun to reduce the scale of interest bearing liabilities, and the tightening of this round of financing policy is consistent with the strategic deployment of the industry."

In fact, the supervision of "b-end" may become a normal means. A number of respondents believe that the "real estate financial Prudential Management System" is part of the long-term mechanism of real estate, and will be implemented continuously after it is officially implemented.

The power of leverage

According to the data of the National Bureau of statistics, nearly half of the funds in place by real estate enterprises come from sales (deposits and advance payments, personal mortgage loans), and the rest from financing. Therefore, whether in the demand side or the financing side, the deleveraging policy will have a great impact.

A person in charge of a large-scale real estate enterprise in Shanghai told the reporter of the 21st century economic report that in recent years, the control of leverage on the sales side has become more and more strict. Taking the change of pre-sale conditions as an example, "at the earliest time, the land can be sold after the land has been taken and a planning and design drawing is available; at the back, the project must be started, but only if the number of floors above and below the ground reaches" plus or minus zero. "

He said that since then, the policy has evolved to specify the proportion of capital investment in addition to the construction schedule. In the past two years, some cities have put forward the rigid requirement that buildings must be capped. Moreover, according to the regulations, the deposit and advance payment must be entered into the special supervision account and be limited to the project development and construction.

"Relying on a project's deposit and advance payment to support the rolling development of one or more projects, that era has long passed." He said.

At the same time, after 2013-2014, the real estate industry has entered the stage of oversupply from supply exceeding demand. Although there are still structural opportunities, the overall demand dividend is rapidly disappearing.

As one of the "three red lines", the "asset liability ratio after excluding advance collection is greater than 70%", which has been regarded as the red line of debt ratio of real estate industry. When the market is in the rising cycle and the industry is expanding rapidly, there are many cases of breaking this red line.

"The actual situation is more serious than what is shown in the table." The above-mentioned real estate enterprises pointed out that many enterprises make debt recessive through off balance sheet financing, while the financial indicators on the balance sheet are still healthy. In addition, the popular co investment in recent years is also easy to be made into off balance sheet debt.

He said that this is a manifestation of the inertia of the development of the real estate industry, that is, to achieve high growth through excessive debt, or even "overtake on a curve". Although there are also cases of capital chain fracture caused by excessive debt, in the past practice, this model has been tried and tested repeatedly.

It is easy to reduce debt, but difficult to achieve high growth

Due to the precise constraints on debt scale, the launch of the "three red lines" is likely to break this path dependence.

About 70% of the "foot on the line rate" proves the harsh policy constraints. Although we give more "good" nature in the external statements, and call this policy the norm of the industry, according to the reporter of the 21st century economic report, the research on this policy has been carried out.

Nevertheless, due to the large scale of the matter, many real estate enterprises have formed a consensus of "reducing debt" internally. According to the above-mentioned Beijing real estate enterprise personage, the company where they are is required to pay close attention to research and form several sets of plans before the policy is officially implemented.

As far as the whole industry is concerned, Guotai Junan believes that this round of policy tightening has little impact on the industry as a whole, because "the overall solvency of the industry is relatively stable" and the real risk is controllable. "Although some real estate enterprises, such as rongchuang and Rongsheng, are in the red and orange file, the extent of financial indicators exceeding the standard is not large. We can improve the static liquidity of the balance sheet by increasing sales receipts at the end of the quarter, financing off the balance sheet, and reducing cash expenditure near the end of the quarter, so as to enhance the position and reduce the financing constraints."

But it is easy to reduce debt, but difficult to achieve high growth. The aforementioned Shanghai real estate enterprises said that "the times are changing", and the era of expansion through high debt has become history.

He said that according to the new rules, even if the "green file" standard is met, the scale of enterprise lending is still limited. Considering that the industry has entered the "Silver Age", the market space is shrinking. This also means that the class of the industry will continue to solidify, and there will be no chance of overtaking on the curve. In addition, if the regulators are determined enough, they will manage the off balance sheet debt in the future, so that there will be less room for corporate financing.

At least in the short term, this expectation has led to some strategic changes, such as land acquisition and investment. At the recent mid-term performance meeting of real estate enterprises, Chen Zhuolin, chairman and President of the board of directors of Yajule, said, "we can't take land indiscriminately now If there is no good land or good project in the second half of the year, we will take the land next year, because it is very painful to get the wrong land. "

Promote The Integration Of Circular Economy Into Fashion Industry