The new third board market, which has more than 1.6 million qualified investors, is constantly strengthening the concept of "rule-based supervision" and "transparent supervision".

In view of the new third board market with both "large and excellent" and "small and beautiful" enterprises, the regulatory authorities are making efforts to promote the optimization of transaction supervision and transaction risk disposal, continuously improve the efficiency of market transaction supervision, strengthen the supervision of key stocks, key accounts, key behaviors and key periods, and adhere to the "zero tolerance" attitude towards malignant abnormal transactions and illegal behaviors.

On September 3, Zhou Yunnan, founder of Beijing Nanshan investment, told the 21st century economic report that "a lot of trading violations are caused by the company's original shareholders who are not familiar with the trading rules, but there are also some shareholders who knowingly violate the rules in order to maintain the company's market value or complete the transaction as soon as possible."

On September 3, the office of directors and secretaries of sharing technology replied to the reporter of 21st century economic report that the relevant violations of laws and regulations "are mainly caused by the shareholders' unfamiliarity with relevant laws and regulations. We will also strengthen the training of shareholders and rectify them.".

To some extent, it also reflects the ecology of the new third board.

Ruixing is involved in Shenzhou Youche and Hedong Yiwei 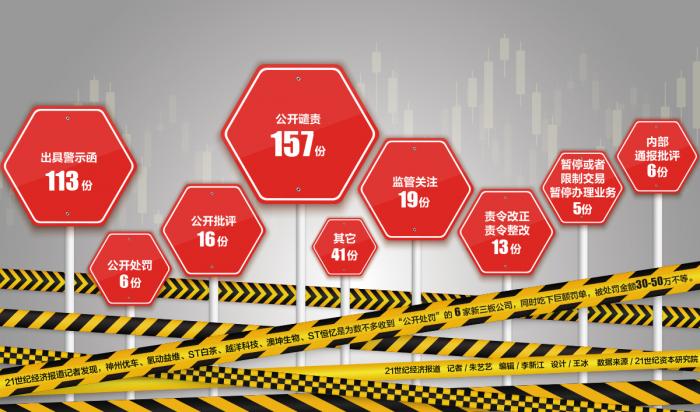 The six companies involved in information disclosure false or seriously misleading statements, not timely disclosure of the company's major issues and other issues, the amount of penalty ranged from 300000 to 500000.

It is worth mentioning that both Shenzhou Youche and hydrogen power Yiwei are listed on the new third board of Ruixing coffee, a US stock company exposed to financial fraud, and were fined 500000 yuan and 300000 yuan respectively.

The CSRC found out that in January 2019, Shenzhou Youche acquired 67% of the equity of Beijing baowo Automobile Co., Ltd. through Changsheng Xingye (Xiamen) Enterprise Management Consulting Co., Ltd., which is actually controlled by Shenzhou Youche. Shenzhou Youche did not include it into the scope of consolidation in the financial statements disclosed in the first quarter report and semi annual report in 2019, which is suspected of illegal information disclosure.

The relationship between Yixing and its related parties and Shenwei auto was not disclosed.

In this regard, China Securities Regulatory Commission (CSRC) plans to give a warning to Shenzhou Youche, and a fine of 500000 yuan to hydev. The relevant responsible persons include Lu Zhengyao, the former CEO of Ruixing coffee, Jin Jun, the director of hydev.

The impact of the above penalties goes far beyond that.

Shenzhou Youche said that the above conclusion has a great impact on the company's audit work, including the uncertainty brought about by the scope of merger and the base date of merger, which has a significant and extensive impact on the preparation of the company's financial statements in 2019. If the company fails to disclose the annual report in 2019 before August 31 (including that day), it will be forced to terminate its listing by the national stock transfer company.

Coincidentally, on July 30, this year, hydrogen dynamics Yiwei plans to apply for the new third board to take the initiative to delist, and it is unable to disclose the semi annual report of 2020 on schedule.

Market manipulation appears in the new third board

China Securities Regulatory Commission announced typical cases of securities violations in the first half of this year, and there are also many new third board companies.

Taiyiyun, a company listed on the new third board, is a typical case. The actual controller of taiyiyun is investigated by the Securities Regulatory Commission (CSRC) in order to meet the conditions of innovation level and raise the company's share price.

Taiyi cloud is the first blockchain company listed on the new third board. It was founded in 2006. Its main business is technology development, technical service and application related to blockchain technology.

Since February this year, taiyiyun's share price has soared.

According to the data, the stock price rose sharply from February 6 to April 30, with a cumulative increase of 148.12%. The market value of the stock rose from 269 million yuan to 668 million yuan.

The national stock transfer company found that taiyiyun shares had abnormal trading conditions. It was found out that Deng Di, the real controller, controlling shareholder and chairman of Taiyi cloud company, used his own account to buy shares continuously, frequently and at a high price with multiple accounts suspected of being associated with him, thus boosting and maintaining the share price, resulting in a substantial increase in the company's market value and reaching the market value standard for entering the innovation level.

In this regard, on June 4, the national stock transfer company issued a punishment decision to publicly reprimand Deng Di, the actual controller of Taiyi cloud, and issued a warning letter to his suspected associated account.

In addition, according to the official website of the stock transfer system, from November 2019 to may 2020, a number of typical cases were quickly and decisively disposed of by the national stock transfer companies.

From the data point of view, the offenders are increasingly diversified.

For example, on July 27, the new third board selection layer opened the market in anticipation. As one of the first batch of Listed Companies in the selection layer, sharing technology received the first penalty ticket on the same day because of the shareholder's suspected letter fraud.

The CSRC found out that as a shareholder with more than 5% shares in the technology, Shanghai Baoyuan Shengzhi investment management company reduced its holding of 80000 shares by means of centralized bidding on July 27, 2020, accounting for 0.14% of the total share capital of the same technology, involving a total amount of 1129100 yuan. However, it did not disclose the reduction plan in advance 15 trading days before the sale, which constituted a credit fraud.

On September 3, a reporter from the 21st century economic report called the office of directors and secretaries of Coshare technology. The other party said, "the main reason is that the shareholders are not familiar with the relevant laws and regulations. We will also strengthen the training of shareholders and make rectification."

What are 1.6 million qfis concerned about?

Chen Li, chief economist of Sichuan financial securities and director of Research Institute, mentioned in an interview with the media that the governance and information disclosure of selected companies also follow the concept of strict supervision, and investment institutions should abide by the rules of the new third board market.

However, some insiders of the new third board industry have analyzed to the 21st century economic reporter that "the development stage and standard degree of the listed enterprises on the new third board are not exactly the same as those in the Shanghai and Shenzhen stock markets. It may not be scientific to apply the supervision methods of the Shanghai and Shenzhen stock markets directly, and the policies and rules should be more inclusive. Of course, the inclusiveness of policies and rules does not include the inclusion of illegal acts, and it is not deregulation. "

More than 1.6 million "portraits" of qualified investors in the new third board have gradually emerged.

According to the survey results, the majority of individual qualified investors surveyed are male, accounting for 65.1%; those aged 45-60 account for 49.9%; those with the highest education background are mostly undergraduates, accounting for 47.6%.

Among them, 81.2% of them are individual qfis and 59.2% are institutional qfis. Specifically, among the individual qualified investors surveyed, 65.6% of them "only open the trading authority of selective layer", accounting for 65.6%; in contrast, among the surveyed institutional qualified investors, "opening trading authority of selective layer, innovation layer and basic layer" accounts for 57.3%.

A-Share Rebound: 7.7 Billion Capital Flows Back To The North, And Some Institutions Start To Increase Positions

*0008% Of Shares Held By The Second Largest Shareholder

At The End Of August, The Export Index Of Dalang Woolen Fabric Rose In A Narrow Range, While The Domestic Trade Price Index Fell

As a famous wool town in China, Dalang's wool industry has always been its characteristic industry and pillar industry. According to the data monitoring and statistics of Dalang Index Office, at the end of August, Dalang woolen fabric Co., Ltd