In 2020, the panel industry is facing a new round of opportunities. Since the second half of the year, the trend of industrial integration is becoming more and more fierce. In the past, TCL technology acquired Samsung Suzhou production line, then sharp (Foxconn) took the Baishan factory of JDI. At present, there are domestic CLP panda production lines waiting to be acquired. It can be predicted that the concentration of LCD market will be further improved in the future.

Looking back on the development history of panel display, the core areas of the industry have shifted from the United States, Japan to South Korea and Taiwan, and now the industrial chain has accelerated to gather in mainland China. Among them, LCD is a long chapter, OLED is the future chapter for all parties, and the Giants are competing for the right to speak in advance. At present, the global panel industry still presents the pattern of "two super and many strong". Chinese manufacturers are rising rapidly. In the current complex industrial environment, the strong are in reverse cycle layout, and the weak are eliminated.

In the first half of this year, under the multiple influences of epidemic factors, low industrial cycle and changes in the global trade environment, major domestic panel manufacturers have experienced a lot of tests, with most of their revenues growing and profits declining.

However, since the second quarter of this year, the supply-demand relationship of the panel has changed, the industry has gradually opened a business cycle, the performance of manufacturers has been rapidly reversed, and capital operation has been frequent.

Compared with the semi annual report, the industry obviously pays more attention to the investment and merger within the panel industry, as well as the future pattern trend.

Korean manufacturers Samsung and LG have already stated that they will gradually withdraw from the LCD market, and Samsung takes the lead. On August 28, TCL technology announced that it would acquire the 8.5 generation LCD production line and module factory of Samsung in Suzhou. At the same time, Samsung display will increase the capital of TCL China Star. After the capital increase, Samsung display will take 12.33% of the equity of TCL China Star, becoming the second largest shareholder.

Du Juan, the COO and CFO of TCL technology, told the 21st century economic reporter that the acquisition of Samsung will have three aspects of synergy for TCL China Star. The first is strategic coordination; the second is conducive to the optimization of TCL China Star's scale and product structure; the third is to improve the rich process technology, production yield and high-end products. At the same time, Suzhou Samsung has nearly 300 teams to join Come in, it's a better fortune.

On the other hand, JDI, a Japanese panel enterprise, has finally restructured. JDI, which has been losing money for many years, has been seeking reform and introducing external investment since 2017. Until August 28, 2020, JDI announced its restructuring plan. On the one hand, it sold the land and buildings of Baishan factory to sharp at a price of $390 million; on the other hand, it sold the equipment of the factory to an American customer. Although JDI did not specify who the customer was, the industry thought it was its big customer apple. In addition to the equipment agreed to be sold, the price was $285 million.

After Japan and South Korea withdrew from the LCD market one after another, their focus turned to the higher-end OLED display technology market, especially Korean enterprises, which have the first mover advantage in OLED, and Chinese manufacturers are also strengthening R & D and production line promotion.

Samsung excelled in small-size OLED panels. According to the data of group intelligence consulting, Samsung accounted for 78.3% of the global AMOLED smartphone panel shipment ranking in the first half of 2020, followed by BOE (7.7%), LGD (5.0%), vicino (3.3%) and Huidian (3.3%). Although Samsung display has occupied more than 90% of the market share in the past, Chinese enterprises and LGD are constantly scrambling for Samsung's market share. In terms of large-scale OLED, only LGD can be produced in large-scale. However, both TCL technology and BOE are studying the printing OLED technology to break through the bottleneck of large-scale OLED. TCL technology, in particular, has invested in Japan's joled this year, and has planned the first 8.5-generation printed OLED production line in Guangzhou and plans to start construction in 2021.

Li Dongsheng, chairman and CEO of TCL technology, said in an interview with 21st century economic report: "we have followed up the printing and printing flexible OLED direction for nearly six years, and built a 4.5 generation line in Guangzhou. This project has also become the national innovation center of printing flexible display. At the same time, we can see that Japan's joled new 5.5 line has begun to be supplied in batch this year. This time, we can see that its technology is mature and the investment can get a return. The other is to participate in its business development. Joled also promised to introduce some new technologies and share some technologies. This will greatly reduce the technical risk for the development of new next generation projects. What we plan is the 8.5 generation line, which is complementary to Japan's joled. "

BOE, TCL and Tianma compete to dominate the LCD market

At present, the acquisition of China's LCD and panda is still in suspense. A number of insiders told reporters that among the recipients of CLP panda, BOE is more likely than TCL technology at present, while LG's production line has no plan to sell this year.

First of all, from the TV panel, LCD in the first half of 2020 According to sigmaitell data, the global LCD TV panel shipment scale reached 127 million units in the first half of the year, a significant decrease of 9.8% compared with the same period last year; in terms of area, driven by the trend of large-scale, the decline was far lower than the quantity benchmark, and the shipment area was about 75.6 million ping10000 meters, a year-on-year decrease of 2.3%.

From a regional perspective, in the first half of 2020, the panel factories in mainland China performed strongly, while the exit strategy of Korean manufacturers inevitably brought about the rapid contraction of market share. Benefiting from the influence of capacity growth and South Korean factory exit, the global market share of China's panel factories reached 55.5% and 59% respectively, with a year-on-year growth of 9.3% and 11.9% respectively; Korean manufacturers contracted comprehensively, and their quantity and area share decreased to 18.8% and 19.9% respectively compared with 28.3% and 28.5% in the same period last year, while the shipment scale in Taiwan remained relatively stable But the market share has increased. 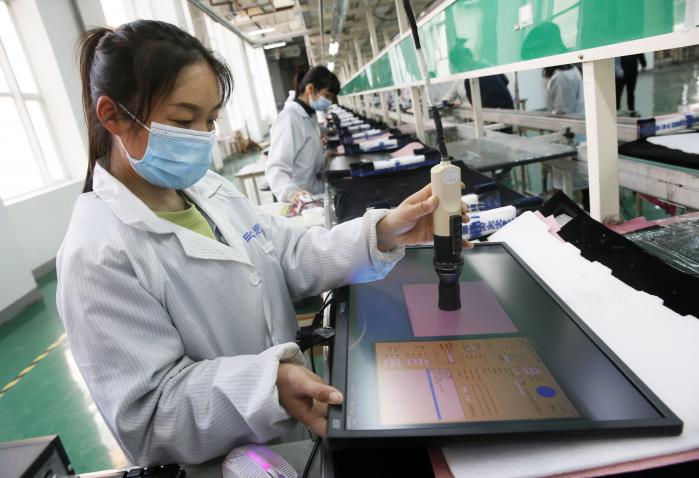 From the perspective of branch manufacturers, according to Qunzhi consulting data, BOE continued to maintain the first place in the industry, with 23 million units shipped in the first half of the year, a year-on-year decrease of 16.5%. The decrease in quantity was mainly affected by the sharp contraction of g8.532 inch output scale, and the focus of TV production capacity gradually shifted to g10.5; TCL China Star ranked second in terms of the number of shipments, and the number and area of TV shipment showed positive growth, especially for shipment The area increased by 42.9%, ranking second.

In terms of LCD panel, Huawei's LCD panel is in the leading position in the global market, including Huawei's half a year's data LCD smart phone panel is the first in shipment, and its customer structure is stable, including Samsung, Huawei, oppo, vivo, Xiaomi and other brand customers. At the same time, TCL Huaxing is also making efforts in the LTPS LCD field. With the promotion of acquisition and the release of production capacity of each company, the ranking competition in the LCD field will continue.

In The Age Of Selfie Economy, How Does 4Inlook Dig Into Meitong Circuit?

The Off Screen Camera Comes To You: Would You Like To Pay For The Full Screen Program?

Under the background that many large factories are in pre research, at what stage would you like to start one?