The Growth Of Domestic Textile Market Is Expected, And International Demand Is Under Great Pressure

With the continuous and effective prevention and control work of new crown pneumonia in China, the negative impact of the epidemic on the production and operation of China's textile enterprises has gradually decreased. The resumption of work, production and business in China has been carried out in an orderly manner, the capacity utilization rate of enterprise equipment has been gradually improved, and the enterprise's confidence in the future development of the industry has been gradually improved. According to the author's calculation, under the support of domestic market consumption recovery, the industrial added value of textile industry in the fourth quarter is expected to reverse the current negative growth trend.

Since the second quarter of this year, domestic consumer market demand has gradually recovered. According to the survey of 5000 entrepreneurs by the people's Bank of China, in the second quarter of 2020, the domestic order index was 50.9%, up 33.5 percentage points from the first quarter, and the export order index was 32.0%, 12.9 percentage points higher than that of the first quarter. In line with the survey of the people's Bank of China, according to the survey of textile enterprises by China Textile Federation, the domestic demand market of textile industry is recovering rapidly, and the international market is still in the doldrums. According to the survey, it is expected that in the third quarter of 2020, the new order index of the textile industry may reach 59.7, which will increase by 7.5 points compared with the second quarter; the foreign order index may be 46.6, which will also increase by 9.6 points compared with the second quarter. It can be seen that textile enterprises are generally optimistic about the recovery of domestic market demand. 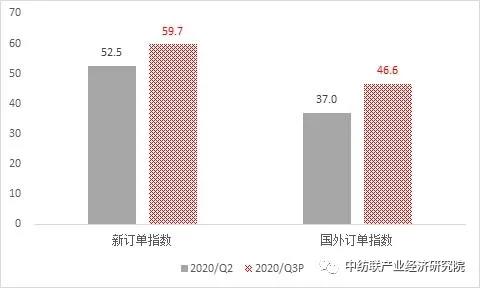 In addition to the expected recovery of market orders, the development of network channels and emerging channels also plays an important role in supporting the recovery of domestic consumption. According to the survey conducted by the Shanghai Office of the China Textile Federation, the main way for consumers to buy clothing in 2020 is through online channels. Due to the impact of the epidemic situation, online shopping channels are further penetrated. 51.0% of the respondents said that online shopping is their main way to buy clothes. According to the current network sales data, the online sales channels of clothing products are active and the growth is obvious. According to the data of the second Shuangpin online shopping festival in 2020 (April 28, 2020 to May 10, 2020), the sales of clothing, shoes, hats and knitted textiles increased by 24.2% year on year. At the same time, 40298 clothing brands with the characteristics of designer customization, online star recommendation, couple style, and national fashion culture, with retail sales of 3.81 billion yuan. The sales data of domestic sports brand tmall also showed significant growth. In July 2020, Anta, Li Ning, FILA, Tebu and Pathfinder sold 570 million yuan in tmall flagship stores, with a year-on-year increase of 55.8%.

Compared with the domestic market recovery trend, the international market consumption started slightly slower. At present, from the perspective of the three major consumer markets of Japan, the European Union and the United States, their market consumption is still very low, and it is difficult to recover to the level before the epidemic in a short period of time. 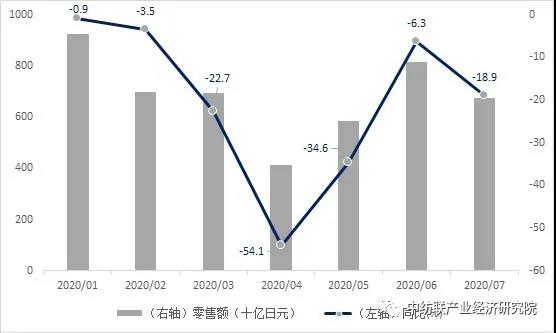 In the EU market, affected by the impact of the epidemic, the economy has fallen sharply, the unemployment rate has increased, the residents' income has decreased, and the consumption expenditure has also been reduced. According to the data of Eurostat, the GDP of the EU in the second quarter decreased by 11.7% year-on-year, which was much deeper than that in the first quarter; in July, the number of unemployed people reached 1.518 million, with the unemployment rate increasing by 7.2%; in June, the retail sales of textile and clothing in the EU decreased by 25.6% year on year.

The U.S. market has not shown a warming trend in consumption. Recently, the U.S. University of Michigan released data that the final value of consumer confidence index in August was 74.1, which has been lower than 80 for five consecutive months, and the consumer confidence index continues to be in a low range. At the same time, the U.S. government's weekly unemployment benefit of $600 has expired on July 31. At present, the states in the United States have gradually issued additional unemployment benefits of $300 in accordance with the executive order of the president of the United States on August 8. The halved unemployment benefits and slow arrival will continue to affect the consumption expenditure of the American citizens. Generally speaking, the pressure situation of international market demand is difficult to ease in the short term.

In the fourth quarter, the negative growth trend of industrial added value may be reversed

Affected By The New Crown, The Export Of Central American Textiles To The United States Declined Sharply

The Change Of Cotton Warehouse In Xinjiang?