Longzhong survey data show that the current orders of terminal weaving enterprises can be maintained to nine At the end of the month, the current overseas epidemic situation has not been completely controlled, and the resistance of clothing export is still large. It is uncertain whether the follow-up orders can continue, and the demand for "Jinjiu" polyester filament may not meet the expectation.

Since entering the third quarter, polyester filament inventory continued to accumulate, and eight The supply pressure of polyester filament was further highlighted in June, and the willingness of enterprises to ship increased. therefore eight After the middle of the month, the market negotiations gradually relaxed, eight In the last week of the month, polyester filament enterprises started the preferential promotion mode in advance, but the promotion activities had little effect, as shown in the figure below, eight Month end promotion single day higher production and sales in 700% Nearby, the average daily production and sales of sample enterprises are insufficient 200% , far less than the promotion effect in the first half of the year. and eight After the end of the first round of sales promotion at the end of the month, enterprises conducted a second round of sales promotion in a short period of time, which aggravated the pessimistic expectations of downstream users. However, under the stimulation of low prices, downstream users still have the willingness to make up their positions, with local production and sales volume increasing and daily average production and sales 200% Above, however eight At the end of the month, the promotion was still at a high level, and failed to reach the average effect of the industry. 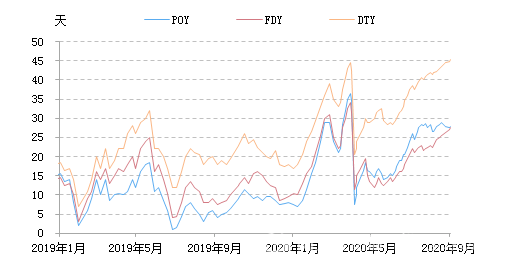 As shown in the figure above, due to the influence of force majeure factors such as the epidemic situation, the inventory of polyester filament this year is far higher than that in previous years. At the end of the first quarter, some achievements have been made in centralized de stocking. However, since the second quarter, the enterprise's inventory has shown an upward trend DTY Inventory leads the way and higher warehouses exist two About months ago. 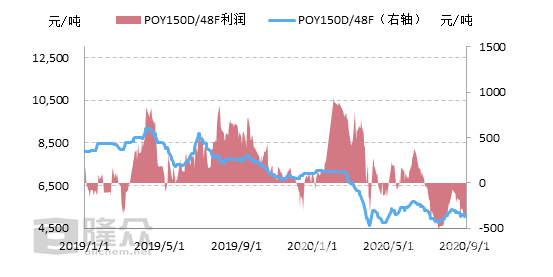 In addition to the data of production, sales and storage, the problem of cash flow loss of enterprises should be paid more attention to in polyester filament market. As shown in the figure three , polyester filament mainstream model cash flow from seven Gradually lost money in January, and seven After the middle of the month, the loss of cash flow continued to increase POY150D/48F For example, seven Monthly average cash flow -362.52 element / Ton, trading day, maximum loss five hundred and twenty-seven point nine three element / Tons. eight In June, the price of polyester filament followed the rising trend of raw materials, the transaction center rose slightly, and the cash flow deficit was alleviated. However, with the start of promotion activities at the end of the month, the cash flow deficit was further aggravated. In the long experience two After months of loss, if nine The market has not yet improved in January, whether enterprises can resist the heavy pressure of losses. At present, most enterprises say that there is no expectation of reducing the negative during the "golden nine silver ten" period, and eight end of month nine Some units shut down in the early months of this month have been restarted. In addition, the domestic new units are put into operation. It is expected that the supply will further increase, which may offset the favorable support brought by the demand to a certain extent nine The monthly market is still in the stage of small accumulation, while the industry is expected to continue in the form of price promotion under the state of high load.

In the near future, the start-up of terminal weaving showed a slight growth trend nine month three The comprehensive operation rate of chemical fiber weaving in Japan, Jiangsu and Zhejiang is as follows 69.36% , up month on month zero point nine four However, compared with previous years, it is still in a low load. This year, the export of clothing textiles is hindered, and most enterprises are actively looking for new growth points, so it is urgent to develop new fabrics. Compared with the high cost of research and development of new fabrics, conventional fabrics such as Chunya spinning, Nisi spinning, suede and so on, the price of new fabrics is higher.

However, the future market expectation of terminal weaving is also quite cautious. Judging from the current order situation, the prospect of "silver 10" is not clear. At present, the inventory of finished products and raw materials of weaving enterprises is also on the high side, and the purchasing capacity in the fourth quarter is limited.

The Growth Of Domestic Textile Market Is Expected, And International Demand Is Under Great Pressure

Affected By The New Crown, The Export Of Central American Textiles To The United States Declined Sharply

International oil prices fell slightly, with US commercial crude oil inventories falling for the sixth consecutive week, providing positive support, but most of the production in the US Gulf region interrupted by the hurricane has recovered