With the arrival of September, some dye giants have adjusted prices to test the market. In recent days, according to the news from major dye manufacturers, all disperse dyes have been raised. Among them, 300% of disperse black ect is adjusted to 32 yuan / kg. Please find out the price before placing an order. From the perspective of price increase, there is no single price increase. 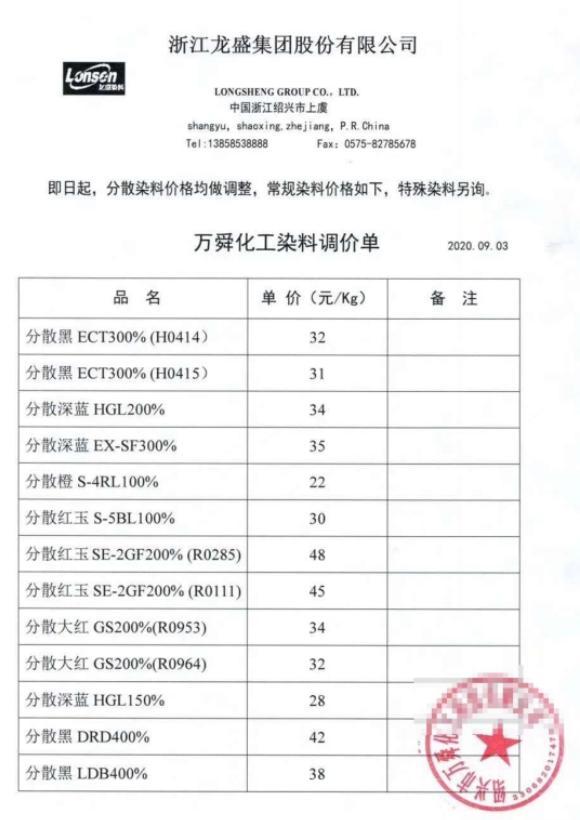 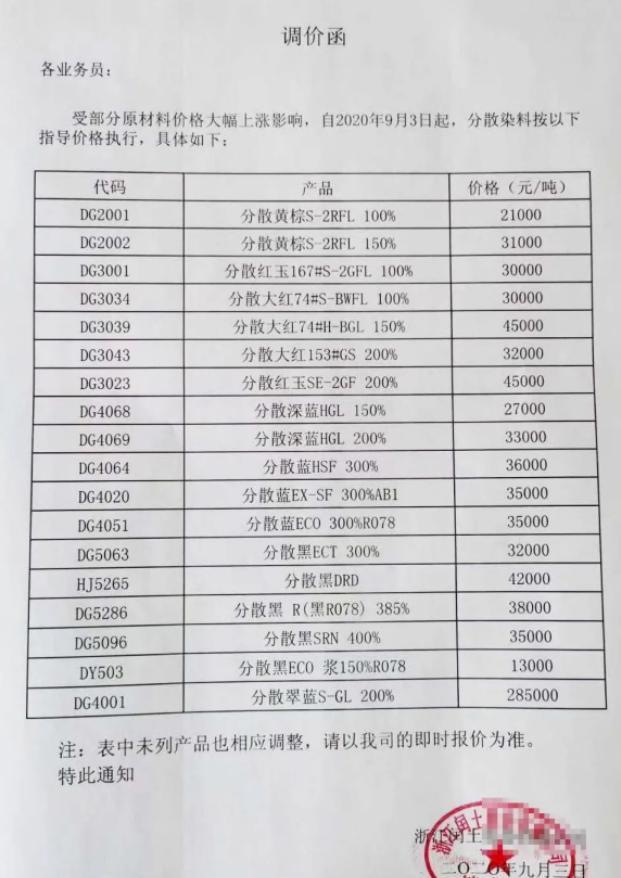 Since the beginning of this year, the price of dyestuff is at a low ebb due to the special period. With the expectation of good environment and the rise of upstream raw materials, dye prices have become a trend! Dyes belong to the downstream key printing and dyeing raw materials in the fabric market. In the late August, the dyeing plants began to show signs of improvement, and the market goods and elastic fabrics began to increase, reappear the card pressing queue, and the delivery time was extended to 1 week Go ahead. At the same time, since the cost of printing and dyeing enterprises is rising and the market is improving, is there a rising trend in dyeing fees?

Recently, a trader complained to Xiaobian: "now, all of a sudden, there is more activity, the dye factory's shipment is slower, and the order delivery time is extended. The customer has been used to the shipping day of a week before, but now it takes two weeks or more. It is hard to accept at the moment, so he comes to urge me every day. I also go to the dyeing factory to urge goods every day. I'm very tired. "

Recently, traders began to ship difficult, difficult days to rush goods, but this year is the day boss has been looking forward to for a long time. Since the beginning of August, the printing and dyeing volume has been increased. Nowadays, the order volume of trade side is also increasing, especially the start of market goods, which adds a lot of vitality to the whole industry.

Once the orders increase at the trade end, the printing and dyeing end will quickly reflect the busy state of many orders. Although the operation rate of printing and dyeing Market is still not high, it has been maintained at about 60%. But the original 60% of the boot rate just happens to be normal production, now the same 60% of the boot rate, pressure card queuing, shipping congestion.

It is understood that at present, autumn and winter fabrics are mainly used in the market, such as four side elastic fabrics, T400, T800 and other elastic fabrics, and winter clothing fabrics such as imitation memory, Nisi spinning, cool silk cotton, Taslon, etc. are also beginning to heat up. Therefore, the current dyeing plants mainly focus on this kind of products, but the dyeing of elastic fabrics is more crowded than other products. Some large-scale manufacturers press the card for 2-3 days, and the delivery takes 7-10 days.

At present, due to the large quantity of goods on the market, some printing and dyeing factories which are mainly market goods are popular. However, there are still some dyeing factories receiving orders in general, not busy, usually 3-5 days to ship. The running rate of dyeing plant is also low, about 60%, and the phenomenon of unsaturation is obvious.

Some industry insiders also said that although the price of dyestuff has risen, the printing and dyeing industry has been affected by the epidemic situation this year, and the production situation has been greatly affected. There are still many dissatisfaction with the opening of dyeing factories. Before the downstream demand is clearly recovered, it will not be rash to raise dyeing fees because of the rising dye prices.

Limited recovery difficult to say peak season, conventional grey cloth is still struggling in the line of life and death

Although the news of dyestuff rise and dye factory burst seems to be the end of the off-season. But in fact, the limited improvement and limited hot sales can not be compared with the peak season, and all kinds of conventional fabrics in the market are still struggling in the life and death line.

This year, due to the impact of the epidemic, foreign trade and domestic trade have been seriously hit. The consumption demand of foreign countries has not recovered, and foreign orders are still missing. The domestic trade market is also in a situation of shortage. The order mode has changed from "large batch" to "small batch, multi batch".

A trader said: "now the dyeing works are getting better, but they are also elastic fabrics and imitative memory. There is no big improvement in large areas. There are 20000-30000 orders in the factory, which is only one third of last year's" Coincidentally, another Nisi textile trader also revealed: "this year, the single volume of NiSi spinning has not even half of last year's, let alone the year before last, the single volume of last year has decreased by about half compared with that of the previous year, and this year, it has decreased by half, and basically all of them are domestic trade customers. We have several customers from the United States and Russia, and the order volume this year is really very small."

From this point of view, the current limited orders can not meet the majority of traders, which also leads to only a small number of traders have improved orders in hand, while most of them are still in the "short order" state. In addition, there are still a lot of uncertainties in Sino US trade recently, and the US Customs has started to strictly check the certificate of origin: from now on, all the goods sent to the United States through all channels, the outer boxes and products should be labeled with "made in China", otherwise, they may face the situation that they cannot be cleared and forced to return. The foreign trade situation is not optimistic!

Although there are many enterprises in the market who choose to have holidays and reduce production in order to control the funds, there are also many enterprises that do not stop production. Generally, the number of machines is relatively small, so they will not choose to take holidays easily. And when the order is difficult to sustain, manufacturers will generally choose to produce some conventional fabrics. As a result, the production capacity of conventional grey fabrics in the whole market has not decreased. On the contrary, with the arrival of the September peak season, many factories with high temperature holiday reopened their machines for production. In the following days, the social inventory of some conventional grey fabrics is in great danger of climbing up again.

Overall, the current textile market transactions are still in the recovery stage strictly speaking, far from returning to the normal level. In this case, if the price of the industrial chain is hyped up, it will make the textile enterprises in the epidemic situation worse!

What Else Does The New Cotton Market Care About?

Under the situation of the epidemic situation, the situation of A-share in China is as follows: oil aviation is full of tears, pig raising is comparable to opening a bank, and mask gold is riding the wind and waves? On the evening of August 31, A-share once a year