After the epidemic, the domestic industrial robot industry has entered a period of rapid recovery.

On September 16, 21st century economic reporter learned from the 6th CEO round table meeting of robot exhibition of China Industrial Fair that from January to February this year, affected by the new crown pneumonia epidemic, the domestic industrial robot production was 21300 sets, a year-on-year decrease of 19.4%; since March, the production of robots has risen rapidly, and the output of robots in August has increased by 32.5% year-on-year. According to the data of the National Bureau of statistics, from January to August this year, the total output of domestic industrial robots reached 136900 sets, a year-on-year increase of 13.9%.

In the first half of this year, the output of industrial robots in China reached 93794 sets, an increase of 10.3% year on year. In July, the output of industrial robots continued to maintain a high growth, and there was an obvious warming signal in the industry demand. At the Expo, the robot has become the largest. In addition to the collective appearance of hundreds of robots, KUKA, Aobo and other brands have launched the first batch of robots with independent intellectual property rights. 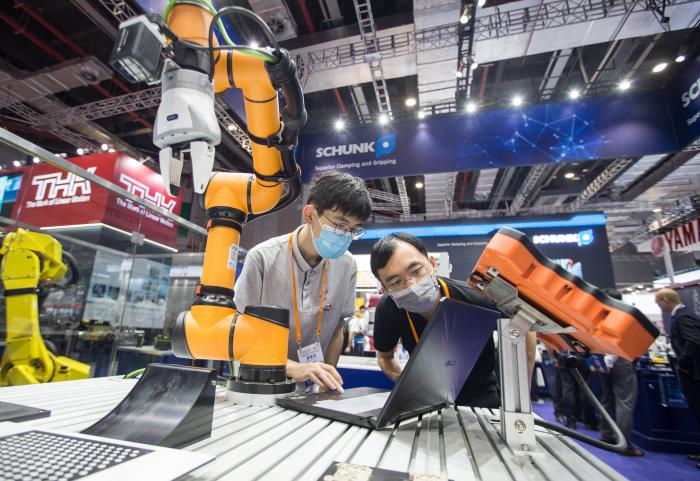 It is not difficult to see that mechanization, automation and intelligence have become the key direction of robot development. Ni Guangnan, academician of the Chinese Academy of engineering, said in an interview with the 21st century economic report that China already has a strong technical capability for artificial intelligence machines, especially for robots used in physiotherapy and health scenes, which can be controlled independently and can not be stuck by people.

But even so, robot production still faces many bottlenecks. At present, the core technology of domestic robot industry needs to break through, and the quality of robot needs to be improved, especially to strengthen the competitiveness of control software and control system. Only in terms of production and quality, can we promote the optimization of cost, so as to be more widely implemented.

Man machine cooperation to speed up

In recent years, with the rapid development of domestic industrial robots, China has become the world's largest robot application market for six consecutive years. Therefore, digitalization, networking and intellectualization have become the inevitable trend of the new generation of industrial production. The report released by IDC predicts that the new formats and models represented by the industrial Internet will bring new development momentum and more business opportunities to the manufacturing industry. By 2024, 60% of domestic manufacturers will use digital twin technology in the process of Internet of things and machine learning drive to achieve 10% operating cost savings.

However, China's manufacturing industry is still facing a lot of challenges in the practice of digital intelligence upgrading. According to the Research Report on the development of China's "new infrastructure" issued by CCID Research Institute in 2020, due to the lack of methodology for the landing of industrial Internet platform in specific industries, most enterprises have not formed a clear understanding of the digital intelligence mode. In addition, the basic supporting industries of some industrial Internet platforms are weak, and the number, quality, safety and reliability of platform solutions are insufficient, which also leads to many enterprises to keep a wait-and-see manner for the upgrading of digital intelligence.

In addition, the high cost also forms the threshold. On the one hand, due to the impact of the epidemic, some enterprises have great pressure on the capital chain, which is difficult to support the investment in digital intelligence; on the other hand, due to the lack of accurate measurement methods for the application value of industrial Internet platform, some enterprises are hesitant, which restricts the further promotion and popularization of the platform.

Therefore, although some traditional manufacturing enterprises regard digital intelligence as an important development goal, they do not put it into the priority implementation content in actual operation. The gratifying thing is that some leading enterprises in the industry not only realize the importance of digital intelligence, but also make some beneficial explorations, and make more achievements.

"The digital intelligence upgrading of Pan manufacturing enterprises cannot be achieved in one step, and there is no universal template." Zhang Xiaoyi, vice president of Midea Group and President of CIO and IOT business division, told 21st century economic reporter that with the penetration of digital intelligence technology into the whole process of product design, manufacturing, delivery and user experience, not only the traditional 3C industry of household appliances, but also the pan manufacturing industry including shoes, clothing, automobile, food, metal products, daily chemicals, etc., has been redefined Upgrading needs iterative solutions that fit each industry and scenario, and cannot copy the past digital intelligence theory and model.

"In the 5.0 era of society, the role of digital intelligence technology in robots has developed from simulation and rehearsal to process control, making human-computer cooperation and robot operation and maintenance more smooth and efficient." Cao Qixin, a professor at the school of mechanical and power engineering at Shanghai Jiaotong University, told reporters of the 21st century economic report.

Professor Feng Xiao, Dean of the Sino German engineering school of Tongji University, believes that intelligent manufacturing is a strategic choice for future development, which can bring about an annual growth rate of 3% to 4% for China's economy in the medium and long term.

At the same time, the application scenarios of robots are gradually landing and expanding. At present, China's medical industry is facing the challenges of aging population and shortage of high-level medical personnel. In the industrial fair, related medical and health robots have also attracted much attention. In the laboratory research and logistics of the hospital, "robot nurse" can help medical staff reduce the repeated and time-consuming work such as drug delivery and detection. It is estimated that automation can increase the completion speed of repetitive tasks by about 50% compared with manual work.

At this Expo, Aobo intelligent and Xiuyu jointly released massage physiotherapy robot products. The robot can complete all the physiotherapy work, surpassing the level of most technicians, and can be applied to medical, rehabilitation, nursing, physiotherapy and other scenes. Academician Ni Guangnan believes that innovation has always been the first driving force for the development of the robot industry. In the trend of intelligent and collaborative industry, the robot industry needs to improve its extensive connectivity with other industries and expand its new increment, new scene and new space.

It is reported that as the ecology of the robot industry is becoming more and more abundant, in addition to the industrial field, AAB intelligence is also expanding to health and service industries. In the automobile industry, which has attracted much attention, in 2019, due to the slowdown of the industry growth, the growth rate of domestic robot industry has also decreased. According to the National Bureau of statistics, there will be 186900 sets of industrial robots in China in 2019, a year-on-year decrease of 6.1%.

Dr. Zhang Sheng, a researcher at Ningbo Research Institute of Zhejiang University, said in an interview with the 21st century economic report that in the field of medical and health care, the most important application of robots is high accuracy of position and action repetition rate, and controllable strength. At the same time, the robot's physical therapy time is also more durable. However, there are also many industry pain points. "For example, the cost is too high, the action is single, and it is unable to adapt to circumstances. Even there are certain risks in safety. In terms of touch, the robot can not achieve the real skin feeling, and it is too stiff. All of these have to be overcome one by one to become a real humanoid physiotherapy robot. "

In his opinion, in the past few years, most domestic enterprises have used robots as low-end mechanical equipment, which shows that the robot industry is still in its infancy, and the overall intelligent application software and stronger substitutability need to be solved.

Ministry Of Industry And Information Technology: Supporting The Transfer Of Textile And Garment Industry To The Central And Western Regions