On September 17, the main venue of cloud habitat 2020 was moved to online for the first time. Zhang Yong, chairman of the board of directors and CEO of Alibaba group, said in the keynote speech that the new crown pneumonia epidemic accelerated the process of digitization, and digitalization also contributed to the victory of the epidemic. During the epidemic, Alibaba's health code, nail online office and AI technology applied to clinical diagnosis of new crown pneumonia are all digital achievements. 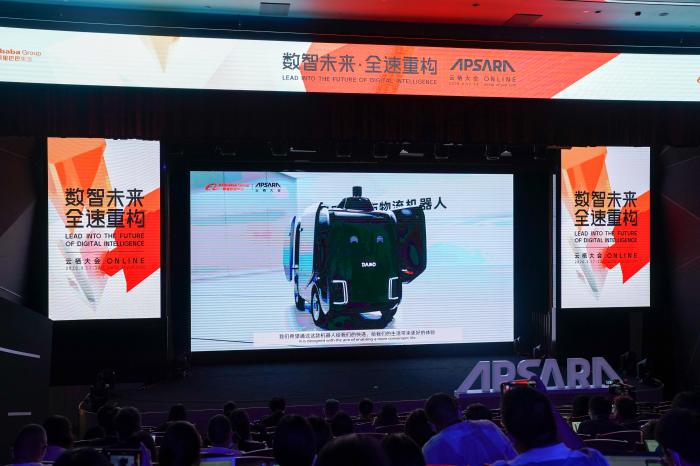 The former is cloud computer, which is only the size of a business card holder. The other is an unmanned logistics robot for terminal logistics, which includes Ali's innovation and breakthrough in cloud computing and artificial intelligence.

Behind the two new products, which seem to span quite a long time, are Alibaba's carefully planned application in the digital economy, and the layout of a new cloud computing system has been constructed layer by layer with the guidance of problems.

According to reports, "shadowless" is a supercomputer in the cloud. By connecting a C-key of the size of a business card holder to a screen, you can access the desktop of the exclusive cloud computer, access various applications and files, and expand the computing power in the cloud at any time to carry out office communication, design modeling, animation rendering and other operations. At present, shadowless mainly faces the enterprise office market. In the future, everyone can have a supercomputer on the cloud.

At the same time, shadowless supports on-demand configuration of performance, the price of which is half of that of traditional PC under the same performance, and supports unlimited upgrade. It does not need to be replaced every 3-5 years. Shadowless all data is stored in the cloud, so it is not afraid of computer loss or virus. It enjoys the same level of security protection as Alibaba cloud data center.

The little donkey robot is oriented to the terminal logistics scene and provides the last three kilometers of distribution services. It integrates the most cutting-edge artificial intelligence and automatic driving technology of Dharma Institute. It has human like cognitive intelligence, and its brain emergency response speed is 7 times that of human beings. "We have started the mass production plan now, and I believe we can see it in more campuses, communities and communities next year. Rookies are our closest partners. " Wang Damo, who is in charge of the 21st century economic laboratory, told Alibaba.

At present, Alibaba has registered to set up xiaomanlu intelligent technology company to promote the R & D and mass production of robots.

"The demand for logistics and distribution is exploding rapidly, and it is estimated that in the near future, China will generate 1 billion distribution orders every day. Automatic driving is only one of the means, which essentially makes a new platform to solve the logistics problems. It's just that this business platform takes advantage of the best autopilot technology available. " Zhang Jianfeng further explained that the key to artificial intelligence and digital economy is to solve the problem of industrial integration. As a representative of artificial intelligence, automatic driving is the same.

In addition, Zhang Jianfeng also introduced the important components of the two digital native operating systems, namely "cloud integration" and "cloud nailing integration", and said that these two strategies will change the way people use the cloud, change the way of application development, and create a new form of cloud computing. "Cloud computing is essentially a new system, not only hardware, but also the whole ecology. Ali's innovation is basically based on the cloud in the new end. It's the same with nails. "

The ability to make everything have the cloud is to form a new cloud integration and push the cloud into the end through a variety of new terminals, including it and IOT. Cloud computing is also constantly changing the form of IT infrastructure, the form of the end will also have some profound changes.

Lay out a new system of digital economy

"After the epidemic, the cloud came to us from the sky." Zhang Jianfeng believes that 2020 is a year in which everything can be clouded.

"Through nailing, most of China's small and medium-sized enterprises directly enter the cloud computing era with zero cost and zero threshold." Chen Hang, CEO of nailing, told reporters of the 21st century economic report that 99% of China's enterprises do not have information technology, while 99% of enterprises in the United States have informatization. The scale of American software companies and SaaS companies is very large, with a market value of more than 10 billion US dollars. The enterprises that can really pay for informatization in China are medium and large enterprises, which may not exceed 100000, while there are more than 43 million small and medium-sized enterprises in China.

Alibaba's ambition for digital economy is far from limited to individual products. From tmall genie, rookie little g, to cloud nail integration, cloud end integration, and then to the latest cloud computer "shadowless", little man donkey. The layout of its new digital infrastructure is penetrating into various scenes like a grid.

"We are laying out one layer at a time." Zhang Jianfeng explained that Alibaba cloud is a combination of a series of digital technologies, forming a new system. Each technology in this system should have a breakthrough in the core point, but it is not just a single technology. Alibaba cloud focuses on platform and considers the platform as a whole.

In his view, Alibaba's urgent problem today is not a single point. It may also need to solve process innovation, business innovation, organizational innovation, and even market innovation and business model innovation. There are a series of problems to be solved. For example, smart city is not the best server, or the car with a little donkey, the city will be smart.

Previously, the AI technology of Ali Damo hospital has also been applied to the clinical diagnosis of new crown pneumonia, which can judge CT images of suspected cases of new coronal pneumonia in 20 seconds, with the recognition accuracy of 99%. In general, it may take 8 hours for doctors to diagnose 50 cases, but with the aid of AI, such workload can be completed in 10 minutes.

A Hundred Billion Opportunities For Uavs Are At Hand. How Far Is The "Air Taxi" From Us?

Facing the future, developing unmanned aerial vehicles capable of carrying people is actually the direction that many industry companies are exploring.