The meeting discussed "the impact of the epidemic situation, tightening policy, discount promotion, enterprise development" and other issues. On the topic of "discount promotion", there was general consensus: the harm to the industry is greater than the benefit. At the meeting, Hu Baosen, chairman of Jianye group and Zhang Jingguo, chairman of Zhengshang group, both said that they would not take the lead in reducing prices.

It is not uncommon for real estate enterprises to "keep the price" together, but calling on the industry in the name of provincial chamber of Commerce highlights the seriousness of the situation.

According to the recent requirements of the regulatory authorities, the management of real estate financing is mainly based on the "three red lines", which are as follows: after excluding advance collection, the asset liability ratio is greater than 70%; the net debt ratio is greater than 100%; the cash short debt ratio is less than 1 times. According to the real estate enterprise's "line" situation, it is divided into "red, orange, yellow, green" four grades, and then implement differentiated debt scale management. It is also considered the toughest debt control policy in history.

Although enterprises are struggling to support, domino effect seems inevitable. 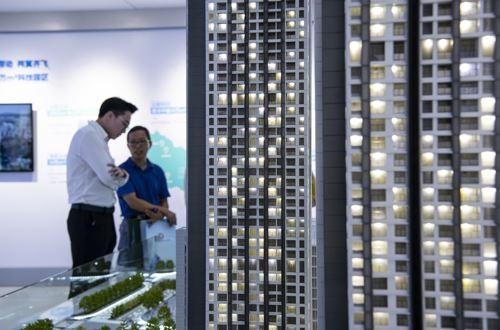 Price reduction is not a phenomenon that developers are willing to see. IC photo

The formation of "price alliance"

It is a common way for real estate enterprises to reduce the leverage ratio by means of quick de stocking in the way of price reduction and promotion. Since September, in addition to Evergrande's massive price reduction, there have been price reductions in some regional markets, which have triggered early owners' rights protection.

A Beijing real estate company told the 21st century economic report that in order to impact the annual performance, the company usually implements sales promotion in the fourth quarter, but considering the changes in policy level, this year may be ahead of schedule.

"First, it will reduce the assets of those who have already bought houses, which may lead to some people's excessive rights protection behaviors, which is not conducive to social stability. Second, the sharp rise and fall of house prices will have a huge impact on the financial industry, construction industry, building materials industry, service industry and other related industries. Third, it may cause a large number of real estate enterprises to close down. Small and medium-sized real estate enterprises that lack capital and land reserve are hard to survive. Once they fail, they will lead to the continuous increase of uncompleted buildings; the rupture of the capital chain may lead to the outbreak of debt crisis. Fourth, consumers generally have the psychology of buying up but not buying down. Even if the price is reduced, it is difficult for the real estate enterprises to achieve the expected goal. "

But in the market game, this kind of "attack and defense alliance" is not easy to establish. The first to lower the price tends to win a better market response, and the latter will fall into a passive position.

Therefore, at the above-mentioned meeting, Hu Baosen and Zhang Jingguo both made a statement of "not taking the lead in reducing prices".

Has the current real estate market reached the level of "no price reduction"?

But when it comes to cities, the situation will still be different. According to E-House Kerui's statistics, in August this year, the inventory sales ratio of new housing in Zhengzhou was 4.6 months, with less inventory pressure. But in some third and fourth tier cities, inventory pressure is still large.

Yan Yuejin, director of the think tank center of Shanghai E-House Real Estate Research Institute, told the 21st century economic report that even if the new financing rules are not taken into account, real estate companies will also carry out price reduction and promotion in the "golden nine silver ten" every year. But this year's policy pressure is great, which makes real estate enterprises have a general sense of urgency.

Race against the red line

In terms of overseas financing, in August, real estate enterprises issued US $6.56 billion of US $bonds, up 176% year-on-year. In the first ten days of September, the issuing scale of US $3.3 billion for housing enterprises.

The frequent occurrence of financing activities is closely related to the current policy "window period".

Since the first half of this year, the financing environment of the real estate industry is relatively loose. Zhang Dawei, chief analyst of Zhongyuan Real estate, pointed out that the current financing difficulty of real estate enterprises is at the "lowest level in history", and the average financing cost is about 4% - 5%, far lower than the level of 6% - 8% in the same period last year.

On the other hand, the Ministry of housing and urban rural development and the central bank held a forum on key real estate enterprises on August 20, and formally put forward the "three red lines" based financing management policy. Although the forum did not put forward the relevant timetable for policy implementation, recently, 12 real estate enterprises participating in the meeting have been asked to submit relevant balance sheet data, which means that the pilot of this policy has been rapidly launched.

On September 14, pan Gongsheng, vice president of the people's Bank of China, said at the regular policy briefing of the State Council that the current capital monitoring and financing management rules of key real estate enterprises have started smoothly and the social response is positive. He will follow up and evaluate the implementation of the rules with the Ministry of housing and urban rural development and other relevant management departments, constantly improve the rules and steadily expand the scope of application.

This also left a financing window for the industry: before the new financing management policy is fully implemented, real estate enterprises still have the opportunity to obtain a large amount of financing at a lower cost, so as to cope with the financial tension caused by the impact of the epidemic and poor sales.

Some people from real estate enterprises also told the 21st century economic report that although the pilot scope of the "three red lines" is relatively limited, the "boots" will fall one day.

The source said that although the capital situation of many real estate enterprises has been greatly improved, there are still a lot of debts off the balance sheet. In addition to the need for continued expansion, the demand for funds is not small. In the short term, the financing action of real estate enterprises will continue.

In addition, according to the 21st century economic report, some companies have been taking stock of their projects and liabilities recently, and have been communicating closely with financial institutions to cope with changes in financing policies. At the same time, the pace of real estate enterprise expansion has been slowed down, including the implementation of detailed management plan.

The Risk Of Wild Animals As Medicine Is Underestimated

Pattern Reshaping: Overall Performance Decline Of New Energy Industry Chain Enterprises In The First Half Of The Year

Liu buchen, a senior observer of the home appliance industry, believes that since this year, there have been obvious differences in the value judgment of foreign appliance brands on the future market. On the one hand, whirlpool