From January To October, Profits Of Industrial Enterprises Above Designated Size Increased By 0.7% Year On Year 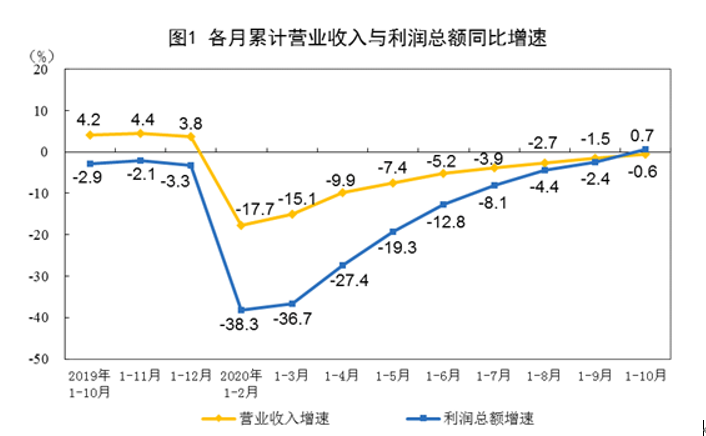 According to the data released today by the National Bureau of statistics, from January to October, industrial enterprises above Designated Size achieved a profit of 5012.42 billion yuan, an increase of 0.7% year-on-year, and a decrease of 2.4% from January to September. The year-on-year growth rate of accumulated profits turned from negative to positive for the first time. In October, the total profits of Industrial Enterprises above Designated Size reached 642.91 billion yuan, a year-on-year increase of 28.2%, 18.1 percentage points faster than that in September.

Zhu Hong, a senior statistician at the industry department of the National Bureau of statistics, said that with China's overall promotion of epidemic prevention and control and economic and social development, the relationship between market supply and demand has been improved day by day, the industrial cycle has been gradually unblocked, the production and operation of industrial enterprises have been continuously improved, and the recovery of profits has been further consolidated.

According to Zhu Hong's analysis, from various specific data, the profit growth from January to October presents the following characteristics:

Third, the profit growth rate of consumer goods manufacturing industry rebounded steadily. From January to October, driven by the domestic demand recovery and the improvement of export situation, the profit of consumer goods manufacturing industry increased by 4.8% year-on-year, 0.4% faster than that of January September. Among them, the profits of agricultural and sideline food processing, food manufacturing, papermaking, tobacco and other industries maintained a double-digit growth of 10% - 30%; the profits of wine and beverage, textile and pharmaceutical industries increased by 5.1%, 7.6% and 8.7% respectively, which were faster than those from January to September; the profit decline of textile and clothing, wood processing, leather and fur, furniture manufacturing, chemical fiber and other industries was further narrowed.

Fourth, the profit of raw material manufacturing industry improved significantly. With the continuous warming of downstream demand, the internal circulation of the industry is gradually unblocked, and the profits of the upstream raw material industry are rapidly restored. From January to October, the profit of raw material manufacturing industry decreased by 6.0% year-on-year, but the decline rate was 9.1 percentage points lower than that in January September. Among them, the decline rate of cumulative profit of petroleum processing and steel industry was significantly narrowed, with a year-on-year decrease of 52.8% and 12.9%, respectively, 13.4% and 5.8% lower than that in January September; the cumulative profit growth of nonferrous metals, chemical industry, building materials and other industries was between 0.9% and 5.0%, with a small increase or a slight increase from negative to positive.

Sixth, the growth rate of industrial finished goods inventory has slowed down. At the end of October, the inventory of finished products of Industrial Enterprises above designated size increased by 6.9% year on year, 1.3 percentage points lower than that at the end of September.

In October, the profits of industrial enterprises increased by 28.2% year-on-year, 18.1% faster than that in September. This is mainly due to the combination of low base in the same period of last year and increased investment income in this month. After excluding the influence of short-term non operating factors, the profit growth rate in October was roughly the same as that of the previous month.

Zhu Hong stressed that at the same time, it should be noted that the growth rate of accounts receivable of industrial enterprises has increased, and the pressure of cash flow has increased, which is not conducive to the continuous recovery of production and operation of enterprises. In the next step, we still need to do a solid job in the "six stability" work, fully implement the "six guarantees" task, firmly grasp the strategic basis point of expanding domestic demand, continuously stimulate the vitality of market entities and consumption potential, and promote the healthy development of production and operation of industrial enterprises in accordance with the requirements of the new development pattern of building a domestic large cycle as the main body and promoting the mutual promotion of domestic and international double cycles.

Retail Sales Of 100 Key Retail Enterprises Increased By 7.1% Year On Year In October

Appreciation Of The New "The Icons" Lookbook Series Of Canadian Geese~