According to foreign media reports, the global fast fashion e-commerce brand platform has completed the latest round of financing, with investors including pan Atlantic capital, tiger Global Fund and Sequoia Fund, with a fund raising scale of 1-2 billion US dollars. After this round of financing, Sheen's valuation may be as high as $100 billion.

This number has exceeded the sum of H & M and Zara, the fast fashion brands in Europe and America combined. The ant group, which is second only to byte skipping and valuation shrinkage, is almost equivalent to SpaceX of Musk on the other side of the ocean. If compared with listed companies, Sheen's valuation is almost equal to one meituan, or two pinduoduo and three Xiaomi groups.

According to public reports, the valuation of Sheen has been growing at a rocket speed in the past two years. When sheen completes the e-round financing in 2020, the valuation will be about 15 billion US dollars; In June 2021, Forbes magazine said Sheen's latest valuation rose to $47 billion.

The question is, why is sheen, founded only 14 years ago, so valuable?

In 2008, sheen was founded in Nanjing, mainly engaged in wedding dress foreign trade business in the early stage.

For these supplier partners, Sheen has never been stingy. According to media reports, in order to ensure the safety of the supply chain, sheen often takes the initiative to subsidize funds for factories and never defaults on suppliers. For the required clothing products, Sheen's information system can access the browser, explore the popular trends of various places, and then send them to the suppliers for reference, so as to keep up with the trend and be "fashionable" enough. 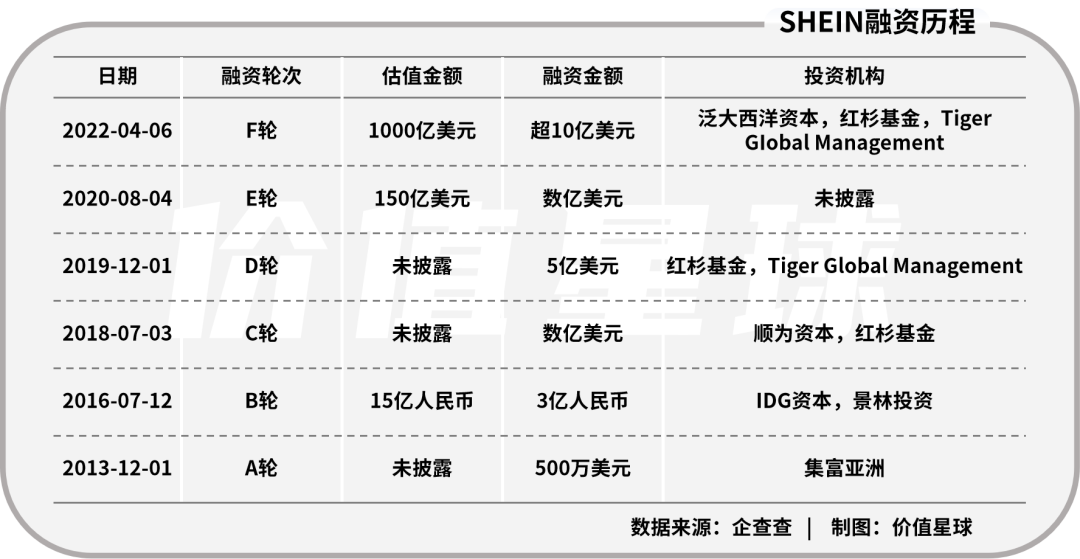 It is reported that from October to December 2021, sheen will present new 5000-6000 SKUs every day, and the inventory turnover days are more than 30 days, which is a very low number in the clothing retail industry. For comparison, H & M and Zara have 138 days (the fiscal year ending November last year) and 92 days, respectively, with an efficiency of only a fraction of that of sheen.

At the same time, "real time supply chain system" is also the core of sheen. According to the official disclosure, it takes only 20 days for a garment to be proofed and delivered to consumers, far more than that of its peers.

For fast fashion, as important as speed is price. For example, Zara's average price is 35.9 euro, and H & M's average price is 26.2 euro, which is enough for Europeans to be friendly to the people. But the price of sheen clothing is only a single digit, coupled with the continuous activities, so that a "consumption degradation" Carnival swept abroad.

From 2013 to 2020, sheen achieved revenue growth of more than 100% for eight consecutive years. Guojin securities research predicts that the scale of sheen in 2021 will exceed US $16 billion, of which clothing is the main part, and women's clothing accounts for more than 60%. The revenue of Zara and H & M in 2020 will be $31.6 billion and $20.2 billion respectively. If the former high growth rate can be maintained, it is only a matter of time before sheen can catch up with the two "old generation".

Who is supporting the sales scale of sheen of 10 billion US dollars?

According to Sheen's plan, generation Z, born between 1995 and 2009, is its main target user. In order to attract these consumers, sheen also takes "low price & trend" as its main selling point.

In the early stage, Sheen has put a lot of ads on Google and Facebook, which has attracted many users' attention. With the rise of "online Red economy", Sheen has also quickly cooperated with a wave of overseas online celebrities, reaping user traffic with low cooperation costs and excellent results.

Today, Sheen has nearly 25 million followers on Facebook and more than 22 million on instagram. According to the latest statistics, there are 17.022 million sheigram posts in the world# More than 20 billion videos have been played on tokeik.

In terms of marketing methods, sheen adopts affiliate marketing alliance marketing, and gives Koc / KOL commission rebate according to the proportion of sales, and the rebate proportion is about 10% - 20%. Sufficient Commission also makes more Internet Celebrities willing to join the publicity of sheen brand.

At the same time, sheen pays great attention to the feedback from online celebrities and fans, and plans production according to the feedback to realize a virtuous circle.

Some American users even complained on twitter, quora and Facebook that they were suffering from "sheen addiction", "I bought a lot of them and couldn't stop", "I didn't want clothes, but I couldn't help buying them", and so on.

In fact, not only sheen, but also cross-border e-commerce is ushering in a new wave of development boom on the basis of China's "large and comprehensive" supply chain and the support of cross-border trade policies.

According to frost Sullivan data, in 2020, the scale of cross-border B2C in China will be about 2.3 trillion yuan, and the proportion of platform sellers and self operated websites will be about 3:1. The compound growth rate of platform sellers from 2016 to 2020 is 32.9%, and the compound growth rate of self operated websites in the past five years is 42.8%.

Of course, where there are people, there is competition, and there are also many covetous cross-border clothing cake. 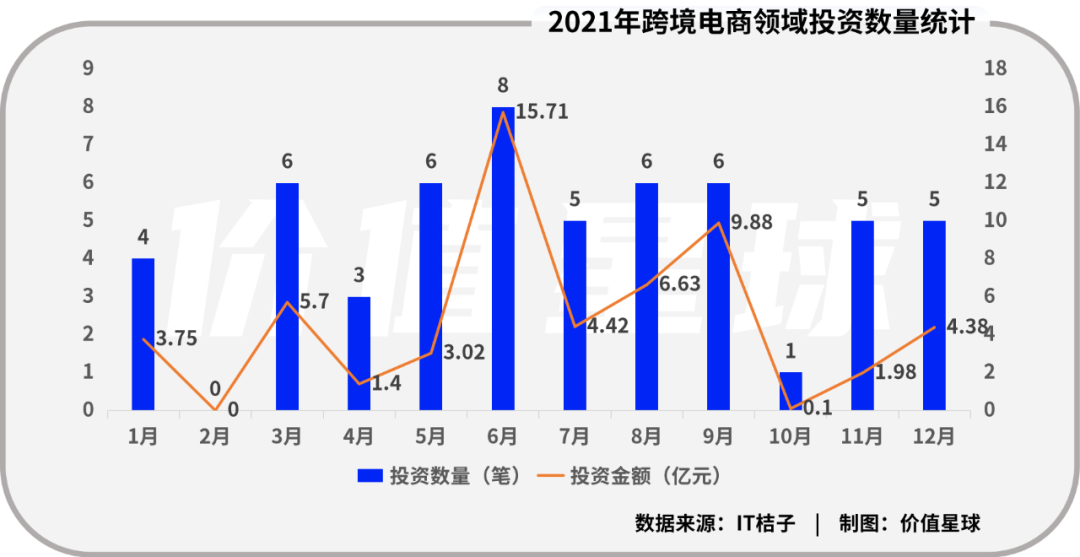 According to it orange data, in 2021, there were 55 domestic cross-border e-commerce financing, with a total amount of nearly 5.7 billion yuan, becoming a hot spot of investment. In addition, cross border e-commerce enterprises, including Zibuyu, zhiou technology and Huabao new energy, are actively seeking to enter the capital market and rush to submit prospectuses.

Among them, byte's dmonstudio was once regarded as the most direct challenger to sheen. The domain name was shut down for three months. Before this, it has spread to more than 10 billion countries and overseas. The byte hopping overseas strategy in a hurry makes people confused.

Ali's allylikes, which was launched in the European and American markets at the end of last year, focuses on women's clothing purchase. The industry generally believes that it is a product of benchmarking sheen, and its user base also aims at generation Z, but the price range is between $20-40, slightly higher than that of sheen.

According to industry insiders, allylikes aims at the middle end of the crowd, and whether it can stand out in the future depends on how much money Ali is willing to burn. It is understood that Ali has launched 11 main e-commerce platforms in the United States before, focusing on fashion and style, family and outdoor, mother and child and children and other categories, but the 11 main also came to an end soon.

In addition to the above giants, many start-up companies also take the overseas market as a rising base. According to vogue business statistics, there are at least 12 e-commerce platforms in the market that are similar to sheen in terms of operation mode, target market and marketing mode, and are operated by domestic companies.

For example, jolly chic, which was founded in 2012, mainly focuses on fashion apparel categories and mainly targets female customers aged 25-40 in the Middle East market. At present, it has completed six rounds of financing, with the latest financing amount of US $65 million. Founded in 2020, cider focuses on INS style and takes the original route. It has also obtained four rounds of financing, with the latest round of financing amount of US $130 million.

Domestic companies are hot, and foreign giants are not absent. Foreign media reported that Microsoft is testing its first cross-border e-commerce platform, buy with Microsoft, which will be launched as soon as April or may. Main sales of household daily necessities, electronic accessories, 3C, clothing, shoes and hats, gardening tools, etc. The report also shows that the platform is free of commission, and the online or offline sales of the platform are more than $1 million.

With a hundred flowers in bloom, cross-border e-commerce is close to the Red Sea, which forces sheen to evolve. Guojin securities research paper believes that the future "breaking circle" path of sheen will rely on two lines of "high-end" and "expanding categories".

In 2020, sheen launched the high-end brand sheen premium, which was renamed motf, and the price remained between $5 and $75. The official website of sheen described motf as: "customers can enjoy high-end clothing without paying high prices.".

In March, sheen opened its first flash store in Rio de Janeiro, Brazil, displaying about 3000 items, including clothes, shoes, accessories and bags, so shoppers can feel the fabric and texture and try to sell products online. According to relevant sources, the main purpose of Sheen's opening flash stores worldwide is to change consumers' stereotype of its low-end products.

At the same time, sheen also extends SKU to cosmetics, home furnishings, clothing and other categories. Among them, the household category covers more than 50000 products including pet products, decoration and office supplies, while the clothing category covers men's, women's and children's wear. The latest news also shows that Sheen has launched its own underwear brand independent station luvlette.

As a result, more and more enterprises in China need to pay more attention to the negative quality of their brands in the global supply chain.

The number of 100 billion U.S. dollars of global capital is not a verification of the value of China's investment in small enterprises. Recently, some media reported that sheen sought to go to the United States for IPO, but sheen immediately denied it.

Brand Analysis: The Private Traffic Established By I.T Group And Tencent Is Expected To Turn Over

With The Rise Of Hanfu Culture, Enterprises Can Apply For Patent Of Original Design Of Hanfu

During The Epidemic Cycle, The Brand Cannot Deliver The Goods In Time. "Where Should Spring Clothes Go?"

Due to the prolonged period of epidemic prevention and control, it has a great impact on the industrial chain and supply chain, especially on offline retail, and brand merchants have suffered from business