In 2021, China's economy will continue to recover, and its status as a major trading country will be more stable, achieving a good start to the 14th five year plan. At the same time, China actively promotes the formal entry into force of the regional comprehensive economic partnership agreement (RCEP), continuously deepens multilateral economic cooperation and deals with the risks of counter globalization. In 2021, China's total import and export trade of goods exceeded 6 trillion US dollars, an increase of 30%, and the scale of foreign trade and import reached a record high. Textile industry is one of them and has made important contributions. China's textile and garment exports reached 315.5 billion US dollars in the whole year, and continued to grow steadily on the high trade base in 2020, setting a new record. It fully demonstrates the tenacity of the whole industry chain under the control of the industry and the international competitive advantages of high efficiency and stability.

According to the statistics of China Customs, in 2021, China's textile and clothing exports reached 315.5 billion US dollars, an increase of 8.4% (in RMB terms, a year-on-year increase of 0.9%). Among them, affected by the high export base of epidemic prevention materials in 2020, the textile export showed a negative growth trend in the second and third quarters of last year, and the growth rate began to turn positive month by month in the fourth quarter and continued to rise. In 2021, China's textile exports to the world reached 145.22 billion US dollars, a year-on-year decrease of 5.6%, but an increase of 22.0% compared with that before the epidemic (2019, the same below). At the same time, supported by the rebound of overseas consumer demand and the return of some orders, China's clothing (including clothing accessories, the same below) exported 170.28 billion US dollars in the whole year, an increase of 24.0% year-on-year, 16.0% higher than that before the epidemic, which is the best level since 2015. 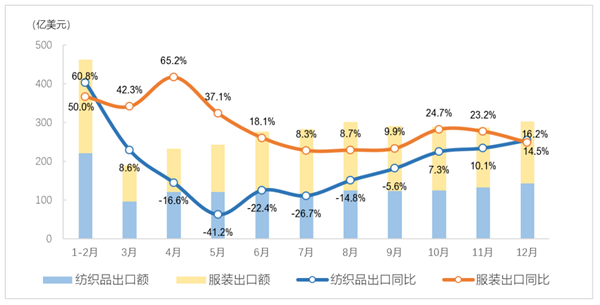 2. The scale of imported textile and garment products has continued to exceed the level before the epidemic situation

With the upgrading of domestic consumption and the improvement of production layout capacity of transnational supply chain of garment enterprises, in recent years, the scale of clothing imported from EU and Southeast Asia continues to expand. During the 13th Five Year Plan period, the average annual growth rate of China's clothing import is about 10%. In 2021, China imported 12.02 billion US dollars of clothing from the world, a year-on-year increase of 30%, and an increase of 36.4% compared with that before the epidemic. Among them, 61.9% were imported from France and Italy; Clothing imports from Vietnam, Indonesia, Thailand, Japan and South Korea increased by about 20% year on year.

3. The United States is still the largest trade partner in the industry, and China's textile and garment exports to ASEAN have increased significantly

Since then, the main export markets of textiles and garments from ASEAN, EU and China have always been the United States. In 2021, China's textile and garment exports to these four traditional markets totaled $172.49 billion, accounting for about 55% of the global export. Among them, the United States is the largest export destination of China's industry, with an annual export volume of 56.35 billion US dollars, a year-on-year increase of 4.0%, accounting for 18% of the total export of the industry. In recent years, the economic and trade relations between China and the United States have been constantly evolving, and the game between big powers has intensified. Currently, the United States still imposes import tariffs on some goods of China, and has introduced a bill to unilaterally block Xinjiang cotton and its products from entering the international supply chain system. Under the new situation, China's export to the United States is under pressure, but it still has a strong international competitive advantage.

In 2021, China's textile and garment exports to ASEAN will increase significantly. Textile and clothing exports from ASEAN countries increased by US $1.492 billion to China in the whole year. The growth rates of exports to Cambodia, Thailand and Indonesia were 54.4%, 2.8% and 54.6%, respectively.

In addition, the EU has become the third largest export industry in the EU. In 2021, China's textile and clothing exports to 27 countries of the European Union reached 46.99 billion US dollars, a year-on-year decrease of 11.1%, which was mainly affected by the decrease of textile export amount. The clothing export to Europe increased by 21.3% year-on-year. Over the same period, China's exports of textiles and clothing to Japan reached US $20.03 billion, down 7.2% year on year, as shown in Table 1.

Statistics of China's textile and clothing exports in 2021

In terms of major export products, China's upstream textiles, including yarns, fabrics / fabrics and end products, have relatively stable export advantages, and their share in the international market has been increasing since the epidemic. According to WTO statistics, China's textiles accounted for 43.5% of global textile export trade in 2020, 4.3% higher than that before the epidemic (2019). According to customs data, in 2021, China exported 13.8 billion US dollars of textile yarn and 66.7 billion US dollars of textile fabrics to the world, with a year-on-year increase of 41.5% and 34.3% respectively. Among the textile products, the export of anti epidemic masks accounted for about 20%, and the export value was 12.95 billion US dollars. The export amount and quantity decreased by 76% and 13% respectively on a year-on-year basis. The decline in the export unit price of masks (↓ 72.3%) led to a significant decline in the overall export of textile products. In addition to masks, the export volume of other textile products (including home textiles, industrial textiles, etc.) was 51.72 billion US dollars, with a year-on-year increase of 27.5%. 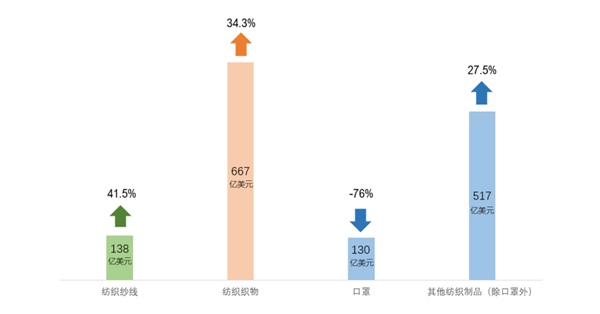 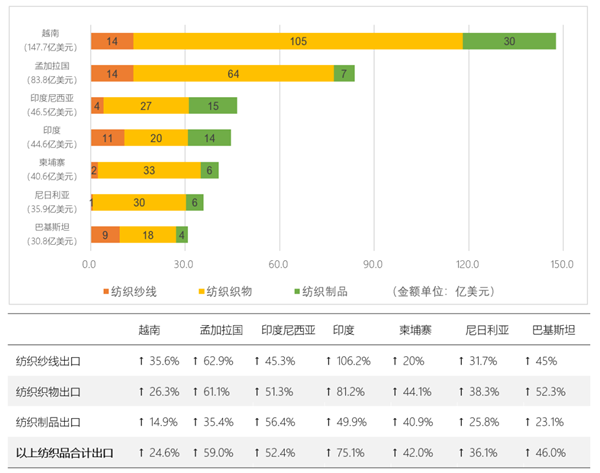 5. The recovery and differentiation of the international consumer market, the growth of clothing export is mainly driven by the warming demand of developed economies

In 2021, the increase of China's clothing export has become an important factor to promote the growth of foreign trade in the industry. According to China's customs standards, the export volume of China's clothing products to the United States, the European Union and Japan will increase by 36.3%, 21.3% and 6.3% respectively in 2021. At the same time, clothing exports to ASEAN, South Korea, Australia, Canada and other countries and regions also increased year on year, and the scale has exceeded the level before the epidemic. From the perspective of export, the contribution of knitting industry is higher than that of export. According to the statistics of China's knitting clothing (hs8.8 billion US dollars), China's export increased by 86.46 billion US dollars; The export of woven garments and accessories (according to hs62 chapter) was US $70.12 billion, up 12.6% year on year. 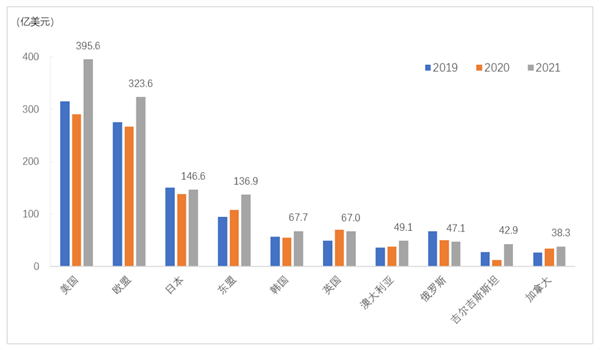 6. The adjustment of global supply chain is speeding up, and the international competitiveness of clothing export in developed economies is under pressure

At present, the global and regional distribution of supply chain is accelerating. Although China is still the primary source country of textile and clothing imports of most countries in the world, its share in the major international markets, especially in the international clothing market, is gradually declining.

Taking the U.S. market as an example, according to the trade statistics of major import source countries by the U.S. Department of Commerce, in 2021, the U.S. import of textiles and clothing from China accounted for 30.5% of its global import proportion, 8.6% less than that in 2020, and 4% lower than that before the epidemic (2019). In particular, the share of ASEAN's import market in the United States (28.7%) has exceeded that of China by 3.5 percentage points in 2021. In the first quarter of 2022, the proportion of ASEAN clothing imports in the United States further increased to 30.8%, and the market share was 8.2 percentage points higher than that of China.

In addition, the import proportion of textile products from the EU in 2020 was 3.34%, slightly higher than that of the EU before 2020. Among them, clothing imported from China accounted for 31.5%, basically maintaining the share level in recent years; In the same period, the import market share of EU, India and India increased by about 1.4 percentage points.

For the Japanese market, according to Japanese customs statistics, in 2021, Japan's import of textiles and clothing from China accounted for 55.4% of its global imports, down 3.2% from 2020, while the proportions of Indonesia, Malaysia, Thailand, Bangladesh and Cambodia in Japan's import market all increased.

More diversified trade volume and industries along the belt and road

Since the belt and road initiative was put forward eight years ago, trade between China's textile industry and countries along the belt and road has become closer. In 2021, China's exports of textiles and clothing to 64 countries along the belt and road initiative amounted to 113.79 billion US dollars, an increase of 24.5% year-on-year, 17.3% larger than that before the epidemic, accounting for 36% of the global export; At the same time, China imported 13.16 billion US dollars of textiles and clothing from the countries along the "belt and road", an increase of 24.5% year-on-year. The co construction of the "belt and road" has played a positive role in promoting the diversification of export markets and reducing the impact of external demand, and the structure of foreign trade in the industry has been further optimized.

China Textile Federation: Analysis Of The Operation Of The Textile And Clothing Professional Market In The Quarter

Hongdou, a branch of the family e-commerce Department: Insight into data, scientific decision-making and brave e-commerce trend As a benchmark of the group's e-commerce, in 2021, 688 live broadcasts were broadcast throughout the year, with three consecutive live broadcast sales of more than one million. The sales of double eleven days cat ranked seventh in the underwear category list, and ranked third in the performance of the group's subsidiaries; In the past 30 days, shuoyin ranked fif