Overseas sports brands have been frustrated in the Chinese market, and the trend of domestic sports is at the right time.

Recently, China trend, the parent company of sports brand kappa, announced its financial performance in 2021. During the reporting period, Kappa's revenue was 1.916 billion yuan, down 2.7% year on year; The net loss was 1.747 billion yuan, and the profit decreased by 196.49% year on year 。 Among them, the sales volume of kappa brand in fiscal year 2021 was 1.656 billion yuan, accounting for 86.4% of the group's total revenue, with a year-on-year decrease of 7.1%.

Nike also released the fourth quarter and full fiscal year performance report of 2022 as of May 31. In the fourth quarter, the sales volume of Nike Greater China region decreased by nearly 20% year-on-year, and the profit before interest and tax fell by 55%. This is the third consecutive quarterly decline of Nike's performance in the Chinese market.

Affected by this, #Nike's market value evaporated more than 80 billion overnight# The news on the Internet is hot. This is the "sequel" of the decline in sales of Nike, Adidas and other overseas sports brands in China after the Xinjiang cotton incident.

On the contrary, hongxingerke, no matter how old he was, received "wild consumption" by netizens after donating charity in Henan; In the past few years, Li Ning relied on the transformation of "national tide" to rejuvenate the brand vitality; Or Anta is throwing money to acquire overseas sports brands.

A campaign of domestic brands fighting back against overseas brands and completing the mission of "Ping Dai" has entered a new stage. Opportunities often come from the beginning of the opponent's internal pull.

As Italy's "European high-end sports brand", kappa is the childhood memory of countless consumers. In 2005, Li Ning and its brand will become a permanent brand in China, which means that it will be operated in China forever.

Beijing trend has built kappa into a fashion sports brand, and the trend sports trend in China led by kappa is also set off. In a short period of one year, the increase of enterprise profit has reached 700%.

Later, with the end of the Beijing Olympic Games, the enthusiasm for national sports declined. Adidas, Nike and other sports brands have begun to explore the transformation, and have embarked on sports fashion style. However, kappa has not been active for a long time. Even due to insufficient product innovation, weak offline management and control, and frequent occurrence of counterfeit goods, kappa's brand reputation was once severely damaged. 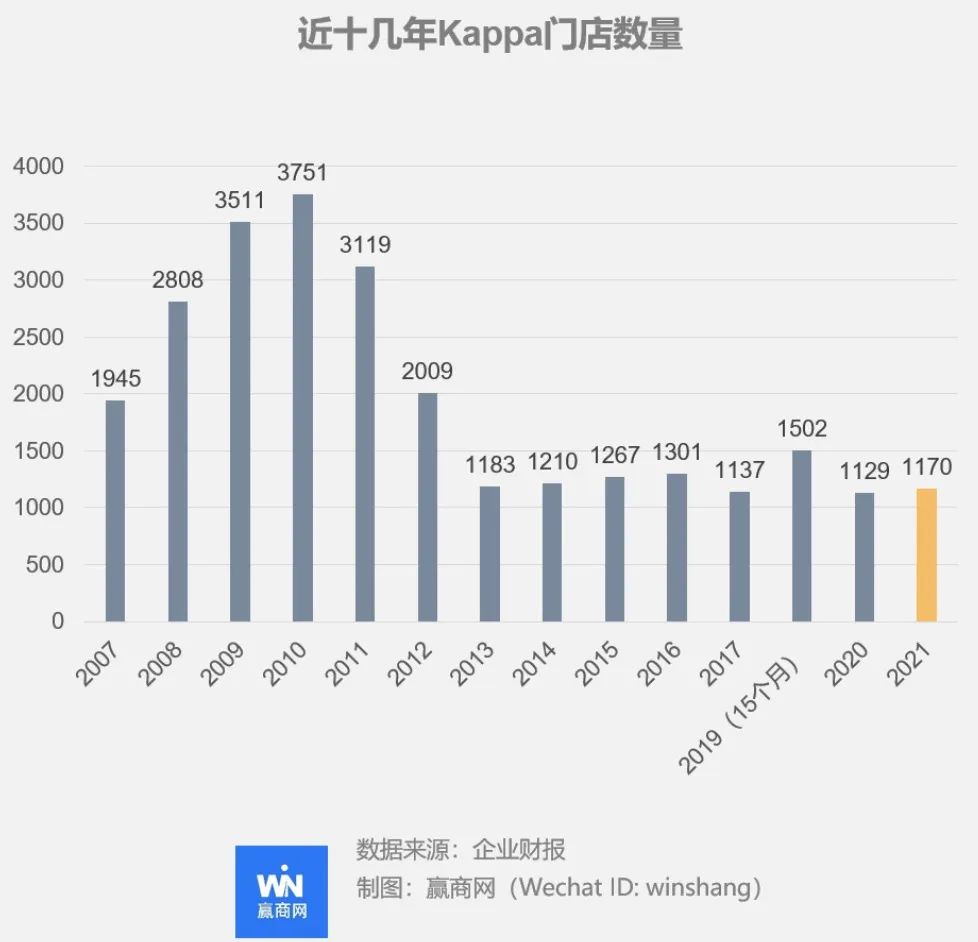 By fiscal year 2021, China trend's explanation for the decline in sales and the expansion of losses is: the business is affected by the uncertainty of the external environment, the consumer enthusiasm continues to decline due to the epidemic situation, and the passenger flow of offline retail stores is significantly reduced 。 In addition, the decline in gross profit margin was mainly due to the increase in retail discounts due to promotion and clearance activities affected by the epidemic.

In order to reverse the declining performance, China trend has sold or leased brand trademarks for many times, which is also interpreted as "selling trademarks for survival" by the industry. This model makes the "Antarctica" taste sweet, but also faces difficulties to eat.

In fact, in July 2020, China trend sold kappa's Japanese trademark and intellectual property rights and other related assets at a price of about 90 million yuan; In October of the same year, China trend, as a franchiser, granted Phenix the right to use its trademark in Japan, South Korea, Australia, the United States and some European regions.

In January this year, China trend disclosed that its indirect wholly-owned subsidiary, Shanghai kappa, granted Quanzhou pingbu the right to use the trademark of kappa kids in mainland China. Quanzhou pingbu can design, manufacture, sell and market products related to the kappa kids trademark in the mainland of China. As for the award of the kappa kids trademark, China trend said in the announcement that "this will help the group put all its resources and marketing efforts into developing core brands in the Chinese market."

Kappa's "asset light" model did work, alleviating the urgent need, but not conducive to the long-term development of the brand. For example, in order to cater to the current interests of consumers, kappa has invested a lot of money in brand advertising and sales, and widely cross-border joint marketing. In 2021, advertising and publicity expenditure accounted for 46.77%, an increase of 8% year-on-year, while the advertising and publicity expenditure of Li Ning and Anta accounted for only about 10%. Such high marketing investment makes it difficult for kappa to sustain.

At present, China's top brands, such as nippa and tebuk, have been developing in the market for many years. Nike, Adidas and other brands, which occupy a large share in the middle and high-end market, also have problems such as sales decline and brand reputation decline.

The consequences of the arrogant attitude of the past

According to the 2022 financial report released by Nike group, the annual revenue reached 46.7 billion US dollars, with a year-on-year growth of 6% on the basis of unchanged exchange rate. Among them, Nike's self operated business revenue was $18.7 billion, up 14% year-on-year. But in fiscal year 2022, Nike's annual revenue in Greater China was $7.547 billion, down 9% year-on-year. Nike said the performance of Greater China was mainly affected by the increase in inventory, logistics and transportation costs caused by the widespread epidemic.

Adidas's situation is not optimistic, like Nike's revenue fell for three consecutive quarters. The financial report also attributed the decline to the impact of the epidemic.

At the same time, Anta and lining are not affected by the epidemic situation and other factors, but show a medium to high-end growth trend in the first quarter of 2022. This means that consumers have more and more confidence in domestic sports brands.

In addition, shaking sound appeared Liu Genghong and other fitness experts with strong ability to break the circle. The sports brand FILA, which was acquired by Anta, has cooperated with Liu Genghong to bring goods. The products were sold out within a minute. This allows a number of domestic sports brands to see more possibilities.

This is mainly because although Nike has successfully printed high-end, professional, sports spirit and other cultural symbols in consumer cognition, many netizens said that Nike's premium was too high. A large number of shoe speculators will fry a pair of shoes up to 10000 yuan, which is more than twice the original price, which is really unbearable.

In black cat complaints, there are more than 13000 complaints about Nike. Especially after 2019, the number of complaints from Nike has risen sharply. Many of these questions about product quality may be related to Nike's relocation to Vietnam. After all, in the North American market, the collectable value of the same type of shoes made in China is higher than that in Vietnam and Indonesia.

In addition, Adidas lost its favor in China. This gives domestic sports brands an opportunity.

How to tear down the negative labels of the past and gain more bargaining power for domestic sports brands still need to form new cultural symbols, strengthen the research and development of product quality, and truly play the value of brand cultural identity.

Li Ning has been trying to attract generation Z through its diversified brand concept and value presentation. Then, this part of consumers will be introduced into the private domain, through multi-channel interaction, strengthen brand identity, and then continue to go out to sea to expand brand influence.

"Domestic products" volume ”It's hard to go back to sea

The national tide has been shouting for many years.

Recently, the Ministry of industry and information technology and other five departments released the "three products" action plan (2022-2025) of digital power consumer goods industry, which emphasizes that we should create well-known brands and cultivate new and high-quality products through digitization. Among them, the project of brand cultivation ability promotion is proposed to support the innovation and development of "Guochao" brand. We should strengthen the research on the consumption orientation of new consumer groups, innovate consumption scenarios, and promote the construction of Guochao brand. Relying on cross-border e-commerce, expand the brand to the sea and open up a diversified market.

This is a good policy for Li Ning, Anta and other national fashion brands.

However, in terms of brand positioning, Nike, Adidas and other international brands have been deeply involved in sports events for many years, and have sponsored a number of world football league, NBA Basketball League, track and field events and E-sports events. As a result, Nike has strengthened its brand image in the field of basketball, and adidas has strengthened its user awareness in the field of football.

Domestic brands know that "learn from foreigners to control foreigners", and have attached great importance to this issue. For example, during this year's Beijing Winter Olympic Games, Anta successfully bet on the ski star athlete Gu ailing, which deepened the connection between Anta and skiing and attracted the attention of many foreign media.

However, in the subdivided track of sports goods, it is more necessary for the brand to have strong R & D ability. The advertising expenditure of Anta Sports in 2021 was 6.117 billion yuan, an increase of 2.566 billion yuan compared with 3.551 billion yuan in 2020, with a growth rate of 72.26%, reaching a new high in nearly five years.

In 2021, Li Ning spent 1.78 billion yuan on advertising and market costs, with a year-on-year increase of 39.1%, while the proportion of R & D decreased from 2.2% in 2020 to 1.8% last year. However, the R & D investment ratio of Nike and Adidas is more than 7% all year round. It can be seen that the investment in R & D and innovation of domestic sports brands is generally insufficient.

On the other hand, it has tried to enhance the popularity of domestic and foreign brands through the acquisition. As mentioned above, Li Ning conducted acquisition exploration in the early stage. After relinquishing the kappa agency in 2005, Li Ning also licensed the trademark to the Raul de Barbero family in Spain in 2010. In 2012, Raul went bankrupt, and Li Ning's internationalization strategy failed again.

This makes Li Ning cautious in M & A. Since 2020, Li Ning has successively acquired Bao Shilong, Tieshi Dongni and Clarks to meet the needs of different consumers.

Anta acquired the trademark right and management right of Feile in China in 2009. The acquisition was not a good one at the time, as Philo China was in the red at the time. After more than ten years of operation, FILA has brought Anta dozens of times of revenue. In 2021, Anta's total revenue will reach 49.328 billion yuan, of which FILA's annual revenue will reach 21.822 billion yuan, becoming the second growth pillar of Anta sports. 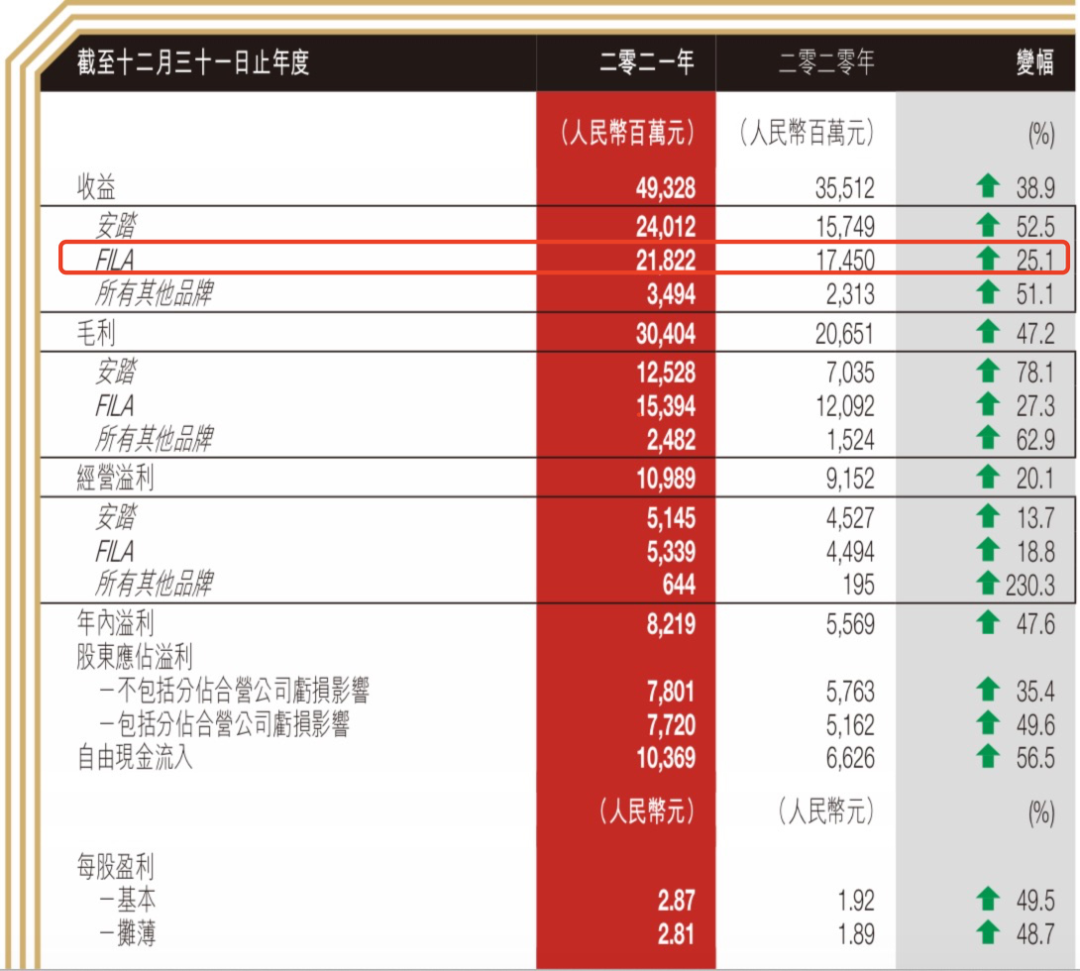 In order to speed up the internationalization process of the brand, Anta has successively acquired many "foreign brands", such as Descente from Japan, Kolon from Korea, Salomon from France, archerx from Canada, atomic from Austria, Wilson from the United States, peak performance from Sweden, etc.

At present, domestic sports brands such as Li Ning and Anta, which have become popular late, have to face the internal volume of the domestic market and consider the obstacles of internationalization. The domestic sports brand is only a microcosm. In the future of strong national strength and rising national self-confidence, domestic brands may no longer be flat in the fields of food and beverage, daily chemicals and electronic products, and more domestic brands will be able to go abroad.

Attention: Investigation And Analysis Report On The Development And Consumption Trend Of China'S Clothing Industry

Market Observation: The Data Shows That The Consumption Intensity Of Domestic Clothing Demand Is Declining

On the afternoon of June 27, the fifth member congress and the first session of the Fifth Council of China Textile Industry Federation were held