At 7:30 a.m. on November 8, the 2020 Shaoxing Marathon (hereinafter referred to as the Vietnam marathon) officially started. As the first officially announced 10000 person marathon event in China after the epidemic, as early as September 8, when the forecast name was opened, 378925000 applications instantly flooded in, causing the collapse of the official website. 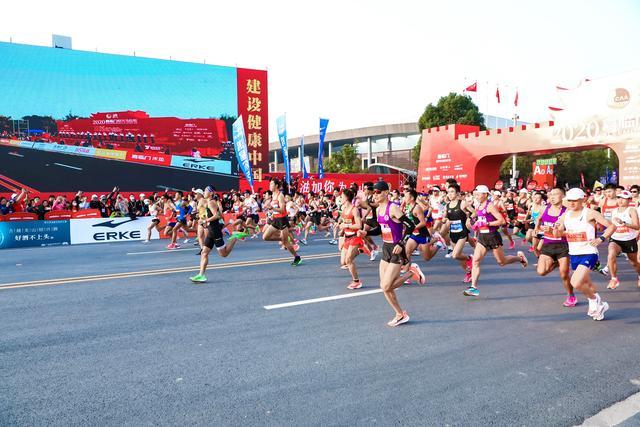 This time, the theme of Yue Ma is "culture over horse, unity of knowledge and action.". "Under the gentle light of the early winter morning light, Shaoxing, a famous historical city, fully demonstrates to the runners her quiet and remote charm that has been precipitated in the long history. It is indeed the "most beautiful track" in the top cultural atmosphere. In sharp contrast to this quiet, runners from all over the country are finally able to run and sweat after a long wait.

In addition to the strong cultural atmosphere that far surpasses other marathon events, Vietnam horse is also a domestic leader in professional level. It has reached the international level in terms of track setting, medical facilities, service supply, security measures and other aspects.

As the top strategic partner of Vietnam horse, the official designated sports equipment brand, National Science and technology brand Hongxing Erke, also shows its technology level that is not inferior to the international famous brand. On the track, the first exclusive boot suitable for entry-level runners, namely "Jifeng", was launched by the brand's e.k-lab Geek future laboratory, which means "the wind gallops over the horse and the firepower is fully opened". "By the majority of running friends praise.

"Jifeng" adopts the latest "bullet" technology of hongxingerke. It is an e-magicfoam intelligent memory material independently developed by hongxingerke. After 80000 bending experiments, it can store and release energy according to different weight, gait and sports environment, and provide sufficient energy feedback for the feet of runners at any time and anywhere. In the endurance testing marathon race, it can store and release energy, As far as possible for the runner to reduce fatigue, stimulate more sports potential. At the same time, the lightweight carbon board on the sole also enhances the stability, reduces the possibility of injury. It can be said that both the structure and the material have made a very professional consideration of shock absorption.

In terms of appearance design, the mesh upper and mesh structure fit the feet and provide comfortable and breathable experience for runners. The sidewall of the shoe is also carefully designed with a time bar, which symbolizes infinite possibilities and encourages runners to break through the self created records.

Redefine "the public" with science and technology

At this year's 20th Anniversary Conference of Hongxing Erke, the brand released the strategy of "new domestic products with science and technology". Over the past 20 years, Hongxing Erke has been taking the lead in science and technology as the core, striving to be No.1 in the field of sports shoes and clothing. That's why we have more than 200 invention patents, which are comparable to the international famous black technology Qitan 1.0 and 2.0, and the smart memory of jietan technology And Jike future laboratory focusing on national Shoe Black technology.

If you pay attention to the dynamic of the brand in recent years, it is probably not difficult to find that in addition to black technology, there is another word frequently mentioned, that is - Volkswagen. At a time when many brands are more and more "striving for the top", Hongxing Erke is focusing on the growing demand for mass sports in the post epidemic era.

For example, we have sponsored Hefei marathon before crossing the horse. Running, a national sport, shows the intention of the brand to be deeply rooted in the mass sports market. For example, in terms of channels, we should step up the layout of the third and fourth tier cities. At the product level, the company has launched the strategy of building a popular fashion product line. It has successively launched erkehuo bullet, which focuses on comprehensive training, Qitan 2.0 for entry-level runners, and Jifeng, a special boot for Yuema. All of these reflect more and more clearly: brands seem to shift their attention from how to improve the premium space of products through marketing to how to create higher value experience for consumers with technology.

For a long time in the past, "popular" was actually equivalent to a cheap synonym to some extent, which meant a lack of design aesthetics and technological value. However, judging from several black technology products recently launched by Hongxing Erke, the definition of "Volkswagen" seems to be being rewritten by hongxingerke, whether it is super large carbon board within 500, self-developed α - flex material, or e-magicfoam intelligent memory material, and appearance design with sincerity and creativity coexisting. Hongxingerke seems to be rewriting the definition of "Volkswagen": brand focuses on the public, which means not to fight subsidy war or fast fashion, Instead, we should constantly break through the barriers of science and technology, and truly achieve the goal of "raising the quality and fighting down the price. "

General manager Lian told us about the development process of the company. He said that the company started to make computer flat knitting machine with the positioning of computer program. However, with our continuous research on this industry, we have developed many new fields and launched a series of new products, such as making sweaters, hats, scarves, etc., and the core competitiveness and key technologies of the company's products They are all self-developed. For example, the foot stren